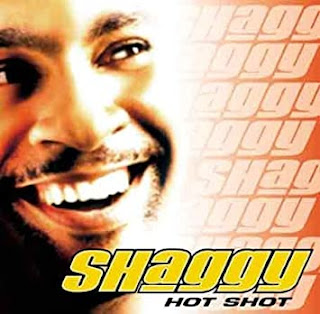 Provenance: I have no idea why I own a copy of Hot Shot by Shaggy.

Review: In some ways the most mysterious album in the collection, appearing out of the mist one day like Brigadoon. I didn't buy this - not a chance - and my ownership of it pre-dates meeting my current partner. So what happened? An errant possession of a past love? The flotsam and jetsam of a long-forgotten student party? A magical object which I need to listen to in order to complete an as-yet undiscerned quest?

Whatever it is, this marks the first time I've actually put Hot Shot in my stereo and pressed play. I had some ideas as to what to expect, as Mr Lover-Lover was ubiquitous during his 'Oh Carolina' and 'Boombastic' era, and later on with a few cuts on this joint, most notably 'It Wasn't Me'. What I was greeted with was a blast of pure turn-of-the-millennium pop.

First, everything is too loud (yeah yeah, "old man yells at cloud") and we've got sixteen whole tracks. We're back in the era of the Great CD Bloat, where every bit of compact disc real estate was taken up with music, inexplicable bonus tracks, anti-piracy tech and, in this case, videos! Just imagine being an excited teen back in 2001, looking forward to getting home with Hot Shot so you can slam it into your CD-ROM. A thrill that, sadly, many kids of today will never experience. That, and leaving a Napster download (of a single song) running all night only to find it's failed come morning.

Secondly, the was a monster, a runaway number one album, multi-platinum in both the UK and USA plus a slew of other countries. It also spawned two huge hits, 'It Wasn't Me' and 'Angel', assisted by Rikrok and Rayvon respectively, so one suspects there's something in the sauce. Sure enough, the two singles that proved so sticky at the top of the charts are impressive - 'It Wasn't Me' is a rollicking tale of infidelity, Rikrok's plaintive interpolations contrasting sweetly with Shaggy's monotone machine-gun rasp, whilst 'Angel' fuses the chorus of 'Angel of the Morning' to the strut of Steve Miller's 'The Joker' to rich effect. They're fun and hooky, and one wishes the rest of this album could consistently hit these heights.

No such luck. Opener 'Hot Shot' is a superb showcase for Shaggy's rapid-fire growl, and his aggressive peacocking here is much more appealing than the lightweight, and even slightly hesitant Shaggy that appears on much of the diet hip-hop and dancehall that makes up the album. It gets worse - sometimes he tries switching up his toasting into a strange sprechgesang style; let's just say that he's no Fred Schneider. Shaggy's voice is a unique and instantly identifiable asset, just not one that cleaves naturally to notions of bel canto. Exhibit A of this can be found on the track 'Not Fair', and I personally felt that it was 'not fair' that I've had to pay it any attention.

I will concede that the oddly melancholic 'Hey Love' has a peculiar charm, and one of the few times where humble Shaggy works; a nagging single-note guitar riff and distorted bhangra sample complete the confection nicely. Also, there's not a better chorus on the album than the one Samantha Cole provides on 'Luv Me, Luv Me' - probably the best track on here and the greatest soundtrack to a gender reveal party ever (what a donkey-brain idea though). However, Hot Shot is front-loaded with the decent stuff, and so past about track eleven or so you might want to give up, even though you're only two-thirds of the way through. Trust me, 'Chica Bonita' is every bit as shit as the song you have in your head; I might even prefer Geri Halliwell's 'Mi Chico Latino'.

Look, I don't wanna be too harsh. If Hot Shot wasn't an album for me back when I was sixteen, time and distance hasn't done anything to bend my sentiments in a favourable direction. In its favour, I will say that it's superior to the clutch of popsters of today cooing out jaded minor-key 'sad bangers'. And, at least, I can say I've finally given Hot Shot a listen. Give me another decade or so and I might spin it again.
Posted by AC at 08:55