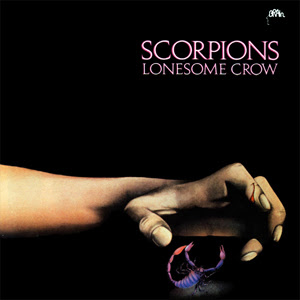 Provenance: Got this as a part of a 'twofer' deal along with Lovedrive, which was the album I was actually after. I did something similar with Gerry Rafferty as I had coveted City To City, but ultimately found myself enjoying Night Owl more.

The packaging for this collection only depicts the original album cover artwork on the inner sleeve, which in Lovedrive's case is just as well (albeit it's not the most flagrant crime committed by the band in this department).

Review: The version of Scorpions I'm most familiar with spans the era from Lovedrive through to Love At First Sting - an era where the band had turned into a chrome-plated hard rock machine, albeit with the ability to throw the odd curveball every now and again. Klaus Meine's idiosyncratic yelp may take some getting used to, but the riffage served up by Rudolf Schenker, his brother Michael and latterly Matthias Jabs was often of the highest order.

However, Lonesome Crow was the debut, and although it features a sixteen year-old Michael Schenker, this release came about prior to his elevation as one of the more melodically astute hard rock soloists of the era. The younger Schenker would depart for UFO, paving the way for headband, Hendrix and moustache aficionado Uli Jon Roth to join the band, remaining until Lovedrive. At this point, Michael Schenker makes a brief return, long enough to play on Lovedrive before flouncing off to form the Michael Schenker Group. I saw MSG supporting the Scorpions once - Michael had a strop, stopped playing and then tried to attack his brother with a guitar.

Ah, where was I? Oh yes, Lonesome Crow. I'm expecting this to be a bit of a formative stab, and early indications are that this isn't going to be the piston-pumpin' headbanger's ball of their prime years. First impressions are that it's a bit hippie-dippie, closer to the heavy psychedelia of, say, Edgar Broughton Band or early Alice Cooper. Though, it has to be said, not quite as accomplished. Opener 'I'm Going Mad' is mostly a Michael Schenker guitar showcase, which I don't mind one bit, plus there's a little taste of the famous Meine wail on display; but its successor, 'It All Depends', already sounds quite dated for the early 1970s. Perhaps because Cream got there first with 'SWLABR'?

I shouldn't be too harsh, as plenty of bands go through the kind of metamorphosis that the Scorps would go on to do. Contemporaries UFO and Status Quo would begin as space-rock and psychedelic bands respectively before going on to toughen up their sound - and the gulf between Judas Priest's bluesy debut Rocka Rolla and the thrash metal insanity of Painkiller just sixteen years later is quite something to behold.

(I also happen to think Rocka Rolla is quite crap - sample lyric: "She's a classy flashy lassy / Imitation sapphire shine" - in contrast to the affection for Quo's early stuff I possess for material like 'Pictures of Matchstick Men', 'Ice In The Sun' and such. Nonetheless, Judas Priest are pretty cool inasmuch as they just seem to get harder and heavier, the obverse of the journey taken by most metal acts).

So it begs the question - what exactly were Scorpions attempting with Lonesome Crow? Judging by the phasing, flanging and wah-wah that abounds, I reckon we're looking at one of those joints that's meant to be deep, man. It's heavy on the atmospherics and wig-outs, every tom-tom sounding like it was recorded from the back of a cave. Are we meant to think of Scorpions as a troupe of mysterious psychedelic goblins? Because that's the overall vibe. If you encountered Lonesome Crow era Scorpions, you'd half expect to come away with a quest involving potions or amulets.

Do I hate this? No. Yes. Bits of it, certainly. I think 'Action' is about the clumsiest thing they ever committed to tape. It's like listening to a Wishbone Ash track from Argus, but it's shit. By the time one gets to the 'creepy' birdsong effects in the intro to the title track, I think one has probably had quite enough. Little of Lonesome Crow is outright terrible, but by the same token there's little to charm or wow the listener. A curio, a line in the sand, the genesis of a band that would go on to do bigger and better things - but no more than that.