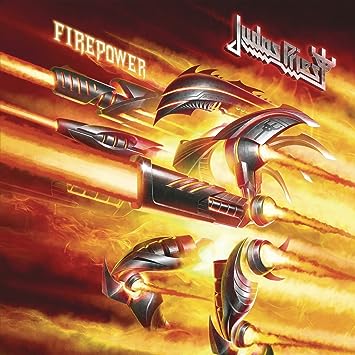 Provenance: I have every goddamn Judas Priest album so I was always going to get this bad boy the day it came out.

Review: There's no two ways about this, Firepower is fucking sick. Although it sports the worst album cover since Painkiller I would happily frame this and stick it in the Louvre. Why? Because it's a piece of Judas Priest ephemera and therefore in my desiccated pea brain is automatically elevated to the status of high art.

However, at the very least it gives you a flavour of what Firepower is all about, i.e., indomitable mecha-monster war machines kicking the entire world's ass. This odd strain particular to Priest - like that of Saxon's obsession with public transport, or Iron Maiden's godforsaken attempts to ram imperial history down one's throat - began by my estimation on 1978's Stained Class (coincidentally, the album that debuted their current logo) with 'Exciter' and has continued via 'Grinder' and 'The Sentinel' before reaching its apogee on the incredible Painkiller, which positively swarmed with these hellbeasts. You know where else you'll find another menagerie of the infernos? Right here on Firepower, muthas.

Whilst I'm a big fan of predecessor Redeemer of Souls, with the growing influence of newest band member Richie Faulkner (who replaced founder KK Downing) this is a far more focused collection. It starts off as every Priest album should - a dirty great riff and a Rob Halford scream - and barely lets up for a moment over the ensuing 58 minutes (another trait it shares with Painkiller).  The one-two punch of the title track and the gloriously bonkers 'Lightning Strike' ranks up their as my favourite Priest opening salvos.

Of course, this is still a Judas Priest album and so the lyric sheet is the usual casserole of bogglesome ineptitude, but it doesn't really matter. Even though little makes sense from one line to the next, it's all suitably pumped-up and aggressive. A good Priest album does not invite the listener to embark upon close textual analysis; instead, it invites the listener to punch things. If your fist doesn't reflexively clench during the choruses of 'Children of the Sun' (which may or may not be about conflict in the Middle East) or 'Flame Thrower', then I can't help you, son.

Speaking of 'Flame Thrower' - "You're on the run / From the stun / Of the flamethrower!" - that's the chorus, genuinely. Looks stupid upon the page? Cool, because it also sounds stupid coming out of my stereo, but it's also perfect. I wouldn't replace a single word because it sounds totally bad-ass in Rob Halford's hands (or mouth, to be more accurate), peculiar inflections and all. Honestly, although he's mostly sacked off the screaming these days, Halford's still an absolute force. He brings an entirely unearned authority and gravitas to songs about robots having a pagga with mankind.

And look - although I'm clowning on some aspects of the Priest experience, it's done from a place of affection. It's taking longer than usual to type out this review as I've frequently paused to air-guitar or headbang to my favourite passages, which are legion. There's true craft on display here; 'Lightning Strike', 'Necromancer' and 'Children of the Sun' are magnificent stompers from the first half of the album; on the home straight you've got 'Flame Thrower' and 'Lone Wolf', which would be highlights on any album, along with the mighty 'Spectre'. Although Richie Faulkner has made a point of calling Firepower a forward-thinking album, some of the best bits here are redolent of past triumphs - 'Spectre' being a case in point. A nasty prowler with chewy guitar, thematically it's a direct descendent of 'The Ripper' from second album Sad Wings of Destiny and is all the more enjoyable for it.

I don't really know what more there is to say. If you love heavy metal, Firepower is a distillation of all that was fun and magnetic from its classic era, wrapped up in crisp modern production. If metal is a genre you don't care for, it'll come across as exactly the kind of leather 'n' rhinestone clad nonsense you're no doubt striven to avoid. More fool you, in my not so humble opinion - go listen to Father John Misty or just fuck off, whatever.
Posted by AC at 13:17