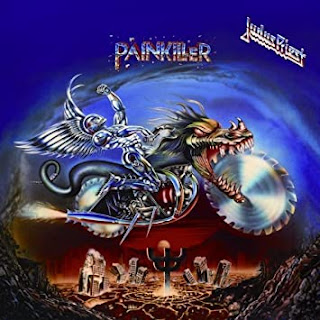 Provenance: My friend the musician Ollie Hannifan recommended this back when he was the schoolboy Ollie Hannifan. I clearly recall Ollie tempting me in to the purchase by suggesting that, on this album, "they just don't stop."

Review: The first thing that needs to be said is that Ollie was wrong, as Painkiller stops at around the 46 minute mark. I get what Ollie meant though. Before its even cued up on the stereo your eyes are bleeding because the cover art work is so elite. A muscle-bound silver Corinthian warrior is riding a half-motorbike half-dragon contraption (in the sky), whilst below tower blocks are being engulfed in lava. You're sweating before you've even hit the play button.

It gets better. New drummer Scott Travis is immediately showcased with a pummelling intro to the title track, which duly explodes into some of the most full-on metal madness ever captured on tape. Nothing is left on the table. Lead-wailer Rob Halford (probably my favourite vocalist of all time) often uses his piercing falsetto as embellishment, but here he kicks off somewhere just inside the hearing range of canines and never lets up. He relents only in the pre-solo(s) mid-section but that's only so us mere mortals can hear him intoning 'Faster than a laser bullet / Louder than an atom bomb / Chromium plated boiling metal / Brighter than a thousand suns.' Bob Dylan this ain't (though Judas Priest take their name from a Dylan lyric), but I can't recall His Bobness ever dealing with mankind's destruction by alien cyborg monsters.

First track down and you're crying out for relief. No mate, because up next is 'Hell Patrol', then 'All Guns Blazing', then 'Leather Rebel'. Every single one of these rattles your skull, snaps your neck and boils your blood until you're left a limp bag of bones and, uh, anhydrous plasma (I'd guess). Hearing this power-metal-on-steroids sound is even more remarkable given that when Priest began at the dawning of the 1970s they happily sat alongside bands like Spooky Tooth and Atomic Rooster. Guitarist Glenn Tipton, who began playing guitar when the Beatles were a going concern, pulls off swept arpeggios like a player twenty years his junior - the sheer amount of practice required to operate at this level, put in by guys who could've rested on their laurels by the time this was released, is astounding. So, time for a respite and, perhaps a blood transfusion?

No chance - next up is 'Metal Meltdown', Halford screaming like a stuck pig before the song crashes into a grinding, fist-clenching chorus (which I can assure you does feature the phrase 'metal meltdown'). Another absolute juggernaut up next with 'Nightcrawler', one of those songs about indomitable hellbeasts that litter the Judas Priest back catalogue. Here, a bunch of people hide in the cellar from some bloodsucking anthracite menace, but...ah, I won't spoil the ending (but it doesn't end well! Everyone dies!). Then it's 'Between the Hammer and the Anvil', which is a gently whispered acoustic number with a strong Joni Mitchell influence. Not really! It fucking slays too.

You're pretty much on the home stretch before the pace abates somewhat with 'A Touch of Evil', which would sound heavy on any other album, but serves as Painkiller's ballad. For some peculiar reason I always get this confused with Defender of the Faith song 'Love Bites' when it's played live. I first saw Priest in 2004 when they headlined Arrow Rock Festival in Lichtenvoorde in the Netherlands. This was their first tour reunited with Halford and I had shaved my head and grown a beard so I could look just like him. They were amazing, but when the first bass note of 'A Touch of Evil' rang out, I was a lone voice in the crowd yelling "Yeaaaahh! LOVE BITES!", a mistake I doubled down on three years later. Can't see me ever getting this right to be truthful.

After a short instrumental called 'Battle Hymn' we're onto the final track, the valedictory 'One Shot At Glory', a track that wouldn't be out of place on a top quality Hammerfall or Helloween release. By the way, you're dead at this point, or comatose, or your blood has just turned into mercury. Different from anything else in the Priest catalogue, Painkiller is gloriously over-the-top, fun, intense, stupid and brilliant. It marked a fine conclusion to the first Rob Halford era.
Posted by AC at 10:52