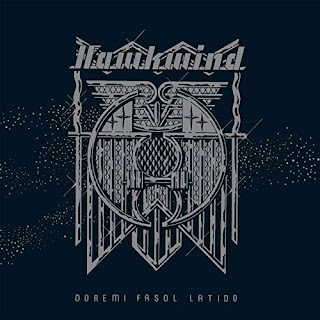 Provenance: As with Gryphon, Hawkwind are another band I've inherited from my dad. I've got albums, been to see them (and a few of their offshoots) live; hell, I even spent a weekend on the Isle of Wight at HawkFest.

Yet I'm no superfan. It's taken me a while to get around to reviewing Hawkwind on this blog. The reason behind that is, in my life, Hawkwind speak to a very specific mood, or perhaps more accurately, a particular state of mind. A state, as it happens, that is not very congruent to sitting down and tapping away at a computer.

Nonetheless, ultimately it's music - and thus even if my third eye is a little attenuated on a dull Sunday afternoon, I'll give it the old college go.

Review: Almost immediately after hitting the play button on my stereo, I regret that I'm not lying back in a darkened room at midnight. I could close a few curtains but it would be a faint attempt at recreating the ideal conditions to absorb Dave Brock's singular contribution to our specie, Hawkwind. In fact, 2am in a marquee surrounded by other revellers and vision-questers is probably the ideal. As I have mentioned before now, Simon Reynolds has convincingly argued the case that EDM can only be properly experienced at a rave, with the attendant sensations, lighting - and drugs. I think the same applies to Hawkwind.

So, I'm not about to get myself twisted at the same time as Paul O'Grady: For the Love of Dogs is on TV (nor will I ever, really - I'm notoriously boring in this regard). Still, at their best - which Doremi Fasol Latido approaches - Hawkwind are a mighty proposition, beaming in all manner of strange vibrations from the dimly-perceived reaches of the galaxy. For the uninitiated, Hawkwind have worn a few hats in their time, but their most famous guise is as 'space rock' pioneers; long, jammy, semi-improvised pieces with an emphasis on repetition and lashings of burbling synths and crazy guitar tones. Not top forty stuff - for the most part.

For the most part, that's what you get on Doremi Fasol Latido, especially on the likes of 'Brainstorm', 'Lord of Light' and the lengthy 'Time We Left the World Today'. However, there's a very cool acoustic spine to many of the tracks here, which suggests a kind of bridging between the hippy past and the electronic whoosh 'n' clang sound that would come to dominate the space rock genre. The woodiness of acoustic guitar and the extra-terrestrial beeps and blats actually blend very well on tracks like 'Space Is Deep' and a personal favourite of mine, 'Down Through the Night', which sounds like a transmission from the starry vault above. Meanwhile another acoustic number, 'The Watcher', was straight enough a composition to appear in relatively unaltered (albeit, massively amplified) form on Motorhead's debut album.

Yes folks, this is Lemmy-era Hawkwind; in fact, Doremi Fasol Latido is the first studio album he appears on. In what form, however, is a little obscure, simply because his bass is virtually inaudible. His inimitable croak, like a toad regurgitating a sheet of sandpaper, graces one track, though it is in (relatively) limber form compared to how it would sound only a few years down the line. Still, I don't really mind the lack of bottom end, as all the fun stuff on Doremi Fasol Latido occurs in the mids and trebles - the hypnotic two chord buzz-guitar for one, and Nik Turner's free verse flute and saxophone soloing. I've long been a big advocate of people going insane on the flute in rock music, and would love to see a revival.

(A couple of days ago I saw a cool band in Brighton that featured a dude playing amplified accordion. Immensely enjoyable. More of this in rock music, please, but specifically, more hog-wild flute parts.)

Now, whilst I very much like the version of Hawkwind that attempted things like melodies and choruses (Quark, Strangeness and Charm), it's this iteration, one that deals more in sounds and textures, that is dear to my heart. Out go pop song structures - in come grinding guitars, motorik percussion and synthesizers that feel like they're about to split apart. Yes, there's plenty of abandon present, but lurking at the centre of Doremi Fasol Latido is a kind of meditative focus; that through ritual (you could describe much of the music as here in the vocabulary of chants and marches) and intent, we're only a tachyon or two away from hitting upon the universal resonance that opens us up to the music of the spheres.

Take heed my fellow psychonauts, Doremi Fasol Latido is the rocket fuel needed to kick clear of Spaceship Earth, even if it's just for forty minutes or so. It's longer than Bezos managed.