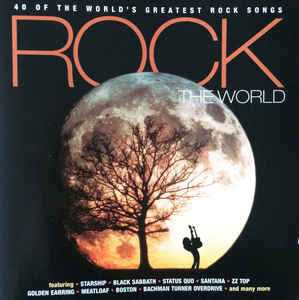 Provenance: Back when I were a lad and finding my feet musically, compilation albums proved a great gateway drug. I look down on them a little these days, and perhaps I should rethink; it is through a compilation album that I got hepped to my favourite band, Blue Oyster Cult.

Now, Rock The World and I have a history going back many years. My mum used to work in a library, and as such would often bring home tapes and CDs that she thought my brother and I would be into. That way led me to becoming a fan, fairly idiosyncratically, of both ZZ Top's Recycler and Aerosmith's Nine Lives, neither of which would ever be hailed as tree toppers by those bands' fans.

Rock The World was one of these albums mum brought home to us, and we played the shit out of it. I think my brother even obtained a copy. However, like some kind of weird divorce, as we drifted off to university, first me and then my brother, our music collections had a parting of the ways. All of a sudden I was bereft of Van Halen, Ozzy Osbourne and Megadeth; he was left pining for Steve Vai and Motorhead, amongst others. Nonetheless, Rock The World went one way, I went another.

Fast forward to April 2020 and I was idly dicking about on Discogs looking for some eldritch NWOBHM release or another when from nowhere the thought popped into my head: Rock The World! And lo, there it was, with a British seller and a total price (including p&p) of £6.44. Automatic purchase. The transaction was conducted swiftly, buyer 'n' seller gave each other pleasant reviews, and then I waited.

Until, finally, I contacted the seller to suggest the CD was lost in the Bermuda Triangle of a Royal Mail sorting office. £6.44 duly refunded and I got on with life.

Then, last week, a padded envelope arrived. Not entirely unexpected as this coincided with my birthday, and friends often send me music as a gift. But - you've guessed it - inside was Rock The World a full eight months after I had ordered it. The address was one house number awry, and this was apparently enough to send it into limbo for two-thirds of a year. Still, I have it now, a little piece of my youth. Nice, eh?

Review: What is there to say? It's the kind of rock comp that contains 'Layla' by Derek and the Dominoes (sans Duane Allman outro), '(Don't Fear) The Reaper' by Blue Oyster Cult (retaining Buck Dharma's masterful solo) and other big beasts like 'Bat Out Of Hell', 'Smoke On The Water', 'Born To Be Wild', 'Boys Are Back In Town', 'Hold The Line'...you get the picture. Little you hadn't heard before, one would suspect.

Indeed, the listening experience is like a pleasant stroll through one of the calmer zones in Jurassic Park - imagine each of these songs as peaceful sauropods lumbering around, any threat that their sheer size presents countermanded by their docility. Fuck, there's even a mimetic quality to 'Smoke On The Water', possessing as it does the exact rhythm, one suspects, of a charismatically large dinosaur ambling to a watering hole.

In fact, this harmlessness is the common characteristic to all the cuts on Rock The World. There's no New Wave spikiness, nor thrashy bite to proceedings, and precious little mystery. Black Sabbath's hoary old workhorse 'Paranoid' is about as occult as things get (though that didn't stop us playing it at Band Bash - our version contained an ill-starred slide guitar solo, performed by yours truly). Saying that, there are a couple of curveballs herein - relatively speaking, of course.

For example, when I first encountered Python Lee Jackson's downbeat beauty 'In A Broken Dream' I was very impressed with how their lead singer could ape Rod Stewart so well (until I discovered it actually was Rod Stewart). Starship's 'Jane' is the only track with a cod reggae section, and Atomic Rooster's brassy 'Devil's Answer' would be partly responsible for my later purchase of their excellent Death Walks Behind You album. Amusingly, as there was about a zero percent chance of licencing a Led Zeppelin track, some jabronis called Black Velvet deliver an admittedly very credible 'Since I've Been Loving You' (were Kingdom Come not available?).

Ultimately, though, the value of Rock The World doesn't stem from the music it contains, though it's a bit of quaint knockabout fun in the age of streaming and shuffle. It doesn't even matter that it's dad rock incarnate, so much so that you can picture it in bootcuts, feigning expertise in single malts and hitting on your girlfriend. No, this album represents something greater - sitting on the battered sofa in my bedroom with my brother and our friends, going nuts at each other over a multiplayer cage match of WWF War Zone on the PS1. Memories of laughing uproariously, dropping the Stone Cold Stunner whilst 'Black Betty' blares away in the background - now, isn't that worth £6.44?