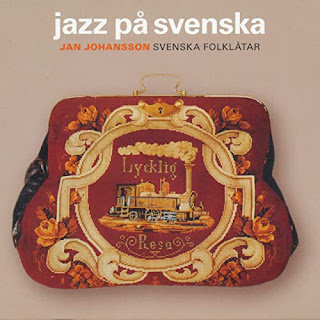 Provenance: In a Classic Rock article about the music that influenced them, one of the members of Opeth mentioned Jazz På Svenska. The concept behind it - Swedish folk music played on piano and double bass in a jazz idiom - intrigued me, so I bought it.

Review: I like jazz, I like Sweden, I like the piano. What I don't tend to like is minimalism, particularly. Or, to be more accurate, its sparseness that tends to turn me off. I've bought music, damn it - so why would I be content paying for the gaps in between?

Of course, those gaps are as integral to the sound as all the noisy bits I treasure so dearly. Nonetheless, I would guess there is an impatience lurking within my heart that finds most music that is meditative and ruminative in nature to be lacking. It's not quite the "don't bore us, get to the chorus" celebration of hooks, melodies and concision that admittedly has worked as a formula for much superb pop music; rather, I think I just like stuff to happen. As much as I clowned Gryphon for their strange an unaccountable pretensions, at least their music constantly shifted and probed, at times to bamboozling effect. Fundamentally, I could tolerate being guided through a maze of keyboards and krumhorns due to the energy and propulsion that went into their dizzying souffle of sound.

Here, on Jazz På Svenska, we are presented with a very different proposition; Jan Johansson on piano, Georg Riedel on double bass and...that's it. Two guys playing jazzy folk music, with no virtuoso moments or dazzling solos. Or vocals. It's the most barebones sounding thing I own, because as far as I can tell everything is done live with nary a hint of an overdub or any other production wizardry. There isn't even a producer listed on the liner notes, just a recording engineer (shout out to my boy, Olof Swembel).

In the past I've made much of how I love the sound of jazz albums of a certain vintage - essentially, that the music lives and breathes through all ensemble members being in one room and playing with each other, as music has been performed for millennia. As basic a concept as this is, it's unlikely to feature on any music that makes it to the charts. As such I cannot help but feel that huge swathes of modern audiences are missing out on the pure and crystalline beauty of hearing music played without stultifying layers of studio 'magic' mediating the experience between performer and listener.

Of course, there's plenty of music that relies on this membrane of teases and tweaks to achieve the intended result, but there's a small thrill in hearing music being played the way its done on Jazz På Svenska. And hey, you could argue that I'm cheating, what with volume knobs, stereo equalisation, even the concept of microphones. "Listen Swinetunes," I hear you say, "why don't you just go and listen to some fucker playing a flute in the woods if you think it's so great?" and yeah, I won't do that. But I did see - before buying this album, incidentally - the Preservation Hall Jazz Band in New Orleans. Some might find their strictly trad repertoire hokey, but hearing it being played in a small room, with the musicians almost at arm's length, with zero by way of amplification, really brought home to me just how distorting a lens technology can be when in the service of music.

However, I'm not about to become the music blogosphere's version of the Unabomber (on this issue, at least); rather, this perspective on the creation and playback of music has, I feel, given me a greater appreciation for Jazz På Svenska as a work of art. Next to the congested sound of rock, pop and the rest, it's a lovely, refreshing thing, redolent of clear mountain springs and wide blue skies. One could quite easily have this playing at a dinner party or a dentist's waiting room, sure - but that's only because its understated, unobtrusive charm lends itself to such settings. Active listening is advised.

On a couple of numbers, such as 'Berg-Kirstis polska', there are echoes of Brubeck's playfulness with tricky time signatures in Johansson's playing. In the main, however, Johansson relies on the tasteful lyricism of interspersing the sparse arrangements with jazzy little touches, such as diminished and minor seventh chords that were unlikely to have existed in the original folk songs. Nonetheless, the playing is deceptive, with even a novice pianist such as myself being gulled into thinking I could replicate much of the right-hand work on tracks like 'Visa Från Utanmyra' or 'Gammal Brollopsmarsch' until I listen again. Combined with the strolling bass of Riedel, there's more going on than is obviously apparent in these sweet, mournful little songs.

Despite being recorded at the dawn of the post-bop era, there is nothing exploratory, swinging or dissonant on Jazz På Svenska; on that basis, one could charge it with being perhaps too polite and conservative. No matter - mood, subtlety and elegance are the watchwords here. A peculiar album in relation to the rest of my collection, but one I treasure immensely.