Born In The USA - Bruce Springsteen 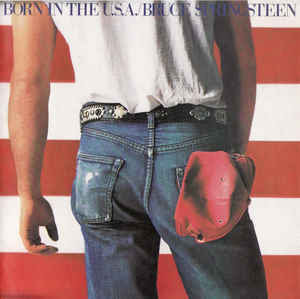 Provenance: I bought this with my own hard-earned piastres but to this day couldn't tell you why. It was a music shop purchase, so I was surrounded by scores of albums I coveted more than Born In The USA; an aberration, then, like much of my life.

Review: Here's a strange one - an album I like a lot, perhaps even love, to the almost complete exclusion of everything else Bruce Springsteen has done.

I consider the E Street Band to be one of the most overrated bodies within the firmament of rock 'n' roll. I don't know how anyone could abide three hours of their dreary, churning mediation of the genre.

Furthermore, I don't think I can really talk to anyone about the Boss. Here in the UK, I've often found people who are big into Bruce Springsteen a bit suspect, like Tex from I'm Alan Partridge, the guy who "likes American stuff." Undoubtedly, in this instance, I'm the weird one projecting my anxieties about the romanticised version of the USA onto the uncomplicated tastes in music of others, but whatever; if you're a Brit and you like Springsteen, in my stupid mind at least, you're a rube.

But listen, don't let me get too high-handed here; I'm prey to exactly the same mythologies, and even attempted to justify getting misty-eyed about eagles soaring over the Tuvan steppe in my Huun Huur Tu review. Maybe, just maybe, I've found it easier to resist the allure of the whole 'cruisin' down Route 66' view of America because I've actually been to places like Kansas. As a visitor I can never truly grapple with the reality of life in the Midwest, of course, but becoming personally acquainted with a place and its people is the next best thing.

On a vaguely related note, actually going to the Mississippi Delta brought me round to finding much of the mythos are blues music quite distasteful. The ink spilled on rather purple descriptions of living conditions of southern Blacks, coupled with an inference that in one or two instances a supernatural assist was required, creates a kind of gothic romance that thoroughly dehumanises the protagonists. Fundamentally, we're talking about talented human beings very much plugged into the commercial realities of the time and place they found themselves, as opposed to the ethereal musical cryptids that a few have become.

How to sum up these ramblings? Perhaps, that America tells good stories about itself.

Bruce Springsteen also tells good stories, very good in fact, considering that he's had no firsthand experience of the lives led by the blue collar heroes and heroines who populate his songs. For all the guff about lumber yards and construction, he has about as much familiarity with the ins and outs of manual labour as Joan Baez. Which is fine, because he's a musician; we don't make the demand that KISS are actually kabuki space aliens, so why the purity test for ol' Bruce? He's the KISS of the workingman, with better lyrics and worse music.

At times, Springsteen's facility with a story is great - witness the mounting desperation and breakdown of 'Downbound Train', the best track on the album, or the knockabout update to Eddie Cochrane's sound on 'Working On The Highway' which masks a tale about contravening the Mann Act. The latter is fun, because much like Sparks or Cheap Trick, it demonstrates an ability to wrap a spiky subject in a sweet melody. You know, I'll even put 'Glory Days' in the 'great song' category, but the meditation on reflecting upon one's flaming youth only starts to make sense (like Bob Seger's music) when you've got a few miles on the clock. Now, the KISS song 'Flaming Youth'? You can enjoy that at any age.

However, much of the remainder gives me pause. Is 'Darlington County' anything more than a raucous pub rocker? Probably not. A couple of charlies drive to South Carolina looking for work, give it the big 'I am' with the locals and promptly fuck off - that's the song, albeit we've got cops, unions and the Fourth of July thrown in for good measure. Even some of the songs that come across as a celebration of male virility, 'Dancing In The Dark' and 'I'm On Fire', sound like the internal monologue of yer da sizing himself up in front of the mirror before happy hour at the Fat Ox.

The less said about the title track, the better. Just like N'Golo Kante is the least underrated underrated player in the Premier League, 'Born In The USA' is the least misunderstood misunderstood song in rock history.  The only reason it has its reputation is that idiots contrive to keep playing it in inappropriate situations. Or maybe they are appropriate, and the likes of Ronnie Reagan was providing a slick meta-commentary to his own neoliberal policy positions? Oh well, never mind, there are plenty of other tracks campaigning politicians can reach for that are far less problematic - how about Neil Young's 'Rockin' In The Free World', that sounds unambiguously fine...

The reason, then, that I still like Born In The USA is that when Springsteen finds his mark as a storyteller he's surgical in his dissection of not just the actions but the psychology of his subjects; and when he is a bit clumsy, you've still got a pretty decent racket backing him up. As much as I do find the E Street Band a fairly turgid proposition, their prosaic accompaniment suits the mood here, a few clangy keyboard tones aside.

Ultimately, it's entertainment. The music coming out of my speakers does not distort due to a lack of literal truth or authenticity. Approach Bruce Springsteen as you would Alice Cooper - substituting the guillotines and sabres for tales of road maintenance and union dues - and you're golden.