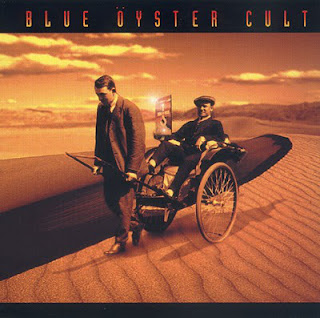 Provenance: I am the world's biggest Blue Oyster Cult fan (fight me), and bought this the very day it came out in the UK.

Review: Coming only three years after Heaven Forbid, I had hoped that Curse of the Hidden Mirror was a continuance of momentum that might see BOC release new studio material at a stately but steady pace. Well, I was wrong on that front - this release, on the final day of my GCSEs, would be their last until The Symbol Remains emerged last year, a gap of almost twenty years.

At the time that Curse... came into my possession I was deep into my BOC obsession; if Eric Bloom farted into a bathtub I would've considered it genius. I also recall defacing my parents' car with a Curse... bumper sticker, much to my dad's chagrin. You must understand, valued reader, that as a daydreaming sixteen year-old Blue Oyster Cult were a galaxy of music unto themselves. I would listen to Secret Treaties or Tyranny and Mutation and imagine myself an inductee into some kind of eldritch confederacy, a cabal of initiates who could tease out dark themes and cryptic signifiers from the music. I now realise how insane this all sounds. However, for a couple of years or so, in my little world, Blue Oyster Cult were The Truth.

Of course, exposure to new people, places, experiences and Steely Dan was to instil a degree of perspective into my worldview but I'm still, by most measures, a fanatic. Alongside the aforementioned Dan and Judas Priest, Blue Oyster Cult constitute the triumvirate of my own personal 'Big Three' artists. Nonetheless, the passage of time has mellowed me, and opened me up to all kinds of sounds I used to disdain (country music, for starters), which should grant me slightly more nuance in my assessments of their output.

The first thing that needs to be said is that, despite a title that acts as a callback to previous albums and the band's 'Imaginos' mythos, the qualities that made BOC so special in the mid-1970s are difficult to discern here (which has been the case, really, since Fire of Unknown Origin). Gone is the twisty, tumbling harmonic minor riffing and the oblique cod-Modernist poetry courtesy of the late Sandy Pearlman and Richard Meltzer. These elements are lamented, and I still don't think BOC ever properly recovered from the firing of drummer Albert Bouchard, their secret weapon with regards to both songwriting and infusing their sound with a light, jazzy sensibility on percussion.

What we do have on Curse... is a slick band of highly talented players who have come up with a diverse and distinctive collection of songs. Yes, horror and fantasy lyrics are still in place, albeit a little more on the nose, less mysterious and arcane, but that's fine. And if the Cult no longer possess the juice that made their early run of releases so damn unique, it's been replaced with a whipcrack sharpness. The best news is that Buck Dharma, one of the most identifiable guitarists of any era, does not miss a beat. I am sure I'm repeating erstwhile Metallica bassist Jason Newstead's impression here, but when he said Dharma's playing "was like hot needles pushed into your ears", I recognised that immediately. Further: Dharma came from a musical background, and there's something of the horn player in his lead work. The pulses, the climbs, the internal rhythms all come from a bop consciousness, even if the modes he typically plays in doesn't (but neither does he really hang around much in the typical rock box of the minor pentatonic). Beautiful.

When it comes to sensibility, it's long been obvious that frontman Eric Bloom favours the heavier material, whilst Buck is the pop guy. That delineation is clear on Curse... with Bloom helming headbangers such as 'Showtime', 'Eye Of The Hurricane' and the excellent, brawling 'The Old Gods Return'. Meanwhile, Buck's sweeter singing style gives a light touch to the almost-power-pop single 'Pocket', lead track 'Dance On Stilts' and 'Here Comes That Feeling', the latter of which could've easily slipped into the Eddie Money catalogue without too many eyebrows being raised.

There are a couple of interesting departures here - Bloom sounds like he's having a whale of a time hamming it up on 'I Just Like To Be Bad', which takes its cues in the verses from mid-period Who; and 'Stone Of Love', a Buck composition that's been knocking around since the early 1980s, has a suggestion of the more Latin-influenced tracks by Love, albeit with resoundingly modern hard rock dynamics. There is, alas, one crap tune here, unfortunately appended to the end of the album - 'Good To Feel Hungry' sounds like an undeveloped studio groove that should've been left on the cutting room floor.

Still - for a band that's been ploughing its own peculiar furrow for the past fifty or so years (a mere forty when this came out), Curse... sounds much hungrier, much livelier than it had any right to do. Okay, so perhaps vampiric skull-grin creepiness remains only in homeopathic memory, but thankfully we've got Ghost, who these days do a fabulous, classic BOC tribute act, so I'm happy. And I'm happy with Curse... too, a superlative hard rock record that crackles with verve, energy and no little craft.