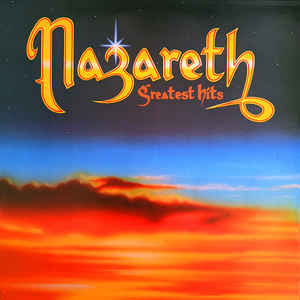 Provenance: Early on in my album collecting life I had a notion that 'best of ' and 'greatest hits' compilations were the way to go with a new artist - sample the cream first, dig through the muck for truffles later. This was an HMV job, probably about a tenner, and an early addition to the collection, within the first thirty albums or so that I owned.

The catalyst for buying this was hearing 'This Flight Tonight', a superb cover of a Joni Mitchell song. What set it apart from much of what I listened to was that Nazareth eschewed groove for a jittery, tense atmosphere. Combined with the cryptic lyrics and Dan McCafferty's razor-wire singing - I hadn't heard anyone like him until this point - I felt I was onto a winner.

Oddly, I've never followed up - this remains my sole Nazareth album. Some bands' output lends itself to compilations, but as I never took the plunge with their catalogue, to me this album is Nazareth. I did see a version of the band at Sweden Rock that featured originals McCafferty and Pete Agnew, and they were - fine. A little slow, and McCafferty faltered at times, but they rendered their greatest hits more or less faithfully. Except...

Review: ...where the pigging hell is 'Hair of the Dog' on this album? Where's 'Telegram'? It seems that this particular greatest hits, first released in 1975, has gone through more transfigurations than Dr fucking Who. According to the version I'm staring at right now, apparently from 1990, I've got four more tracks than the original yet somehow I don't have 'Hair of the Dog'; and whilst subsequent expansions included 'Telegram' its absence is keenly felt here. When I saw Nazareth at Sweden Rock, 'Telegram' was quite easily their best performance, a drama roiling in the sturm und drang of life on the road. I'm getting steamed just thinking that some feckless longhair in the mid-1970s was enjoying tracks made unavailable to me when I bought this in the dawning days of the 21st century.

Anyway, before I get too salty, I should probably return to the task at hand, which is reviewing what is on the album. Two things strike me immediately - one is that Nazareth indulged in more than a few ballads that stray over the line between sweet and saccharine. Weepies like 'Love Hurts', 'I Don't Want to Go On Without You', 'Star' and 'Dream On' are performed competently (I actually like 'Star' a lot) but it jars with the band's image of rowdy Scottish toughs.

The second is that Nazareth are really good interpreters of other people's material. Which isn't a quiet slight against their own songwriting and compositional abilities - it stands alone as a compliment. Where Nazareth succeed is making their versions distinct from the originals, as opposed to slavish note-for-note copies that are all too prevalent. So we have the aforementioned 'Love Hurts' (Everly Brothers), 'This Flight Tonight', 'Morning Dew' (Bonnie Dobson), 'Gone Dead Train' (Randy Newman) and a loopy take on Tomorrow's 'My White Bicycle'. So thoroughly Nazarethfied is this version of 'Gone Dead Train' that I let out an audible "huh?" when I heard the original pop up at a student screening of Performance. Half a millisecond's worth of thought would've led me to the conclusion that it was unlikely Cammell and Roeg asked Randy Newman to bash out a Nazareth number for their arthouse crime flick.

Most everything else on Greatest Hits is the brawling heavy blues rock with which Nazareth made their name - on gigolo anthem 'Bad Bad Boy', which takes its cues from the hoary blues 'Old Grey Mare', McCafferty vies with Bon Scott and Rod Stewart for the title of rock 'n' roll's chief rogue, whilst 'Shanghai'd In Shanghai' and the menacing 'Turn On Your Receiver' hide a great deal of craft beneath their bruising sonics. All of this adds up to a thoroughly enjoyable hour-and-change in the company of Dunfermline's finest.

All of this gives me a slight pang of regret - that unlike the feckless longhair and his mid-1970s copy of Greatest Hits, I will never get to see Nazareth in their pomp. On this evidence McCafferty sounds like he gargles tarmac as part of his morning routine, and to see him going full bore, yelping "I'm a bad bad boy, and I'm gunna steal you love" like some demented yard dog would've been a treat. What I saw at Sweden Rock was serviceable; but just think about it, back in the day, Nazareth slamming it into overdrive, all double-denim, hair billowing from every nook and crevasse, nicotine-stained teeth, the whole nine yards, powering their way through another unstoppable chugger. Hey. at least I've still got Rival Sons, right guys?

It's settled then. Some people would use a time machine to bear witness to the Crucifixion, or to the Great Fire of Rome. Others would go and slay some historical ghoul like Hitler in the hopes of a better world blossoming in the aftermath. Me? Hastings Pier, 9 May 1975 - sounds like it was a blast!