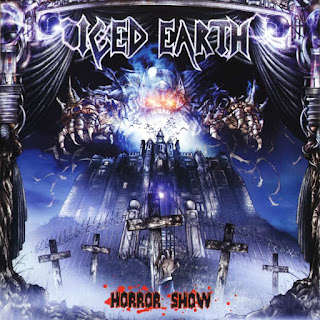 Provenance: Another £1 bargain from the internal message board at a former job. I didn't really know a huge amount about Iced Earth at the time, but the chance to acquire some metal in exchange for a very small sum of metal proved irresistible.

I feel like Iced Earth are a band I've seen at some festival or another in a mid-to-late afternoon slot but my brain has been pounded into slurry by pandemic lockdowns, so who knows? I'm beginning to doubt I ever enjoyed seeing live music, once upon a time.

Review: So here we have it, Horror Show, each track taking its cue from a scary movie or historical personage, with the exception of 'Ghost of Freedom', which comes from the head of lead squealer Matt Barlow, plus a cover of the Iron Maiden instrumental 'Transylvania'. Iced Earth's main man and sole constant, guitarist Jon Schaffer, is responsible for writing virtually all the music and most of the lyrics throughout.

I have a soft spot for anyone who indulges in these kind of monster-based shenanigans, ranging from Bobby 'Boris' Pickett through to Lordi and Ghost, so we're off to a good start. It's not always successful - observe Judas Priest's paean to Loch Ness and its resident cryptid features lyrics that straddle the Spinal Tap 'fine line between stupid and clever' divide (but also, crucially, an indestructible guitar riff). However, when it comes off, it's cool as fuck - the aforementioned Priest with 'The Ripper', Blue Oyster Cult cranking out 'Godzilla' and 'Nosferatu' on the same goddamn album, a whole bunch of Rob Zombie stuff - hell, I'll even allow Alice Cooper's 'Feed My Frankenstein', Elvira cameo 'n' all. The Venn diagram between fans of scary movies and heavy metal must be pretty chunky, so it's a good bet.

Thus, we've got musical tributes here to the Wolf Man, The Omen movies, Jack the Ripper (fertile ground, evidently), the Mummy, The Strange Case of Dr Jekyll and Mr Hyde, The Creature from the Black Lagoon, Frankenstein, Count Dracula and The Phantom of the Opera. This should be a lot of fun!

And, yeah, it is. The music itself isn't much more than rather decent power metal, though I found the mostly acoustic balladry of 'Ghost of Freedom' quite affecting alongside being a welcome change of pace. Matt Barlow - or Sergeant Matthew Barlow of the Georgetown Police Department, to give you some colour as to his current activities - is vocally a good fit, his delivery belying an obvious Geoff Tate (Queensryche) influence. My biggest bugbear with a lot of bands in the thrash and power-metal is that the drumming production sounds piss-weak. Somewhere along the line the rolling thunder of early metal became replaced with the impotent pitter-patter of double-bass pedals and a tinny, clattery quality to the rest of the kit.

However, there's plenty of schlock to make up for this, including the wonderfully devilish incantations on 'Damien', hokey vocal effects on 'Jekyll & Hyde' (yes, of course, the two 'characters' speak to each other) and a suitably melodramatic finale in 'The Phantom Opera Ghost'. Bonus points, too, for doing a song called 'Frankenstein' which is about the doctor, not his monster, though it challenges us to ponder as to 'Who's the monster? Who's the victim?'. Hello, has anybody considered that, uh, maybe society is the monster in all this? Anyway, 'Frankenstein' is the highlight of Horror Show for me, though its Maiden-esque successor 'Dracula' runs it close. Hey buddy, have you ever wondered if society is the vampire?

My own personal gripes with the percussion aside, everything sounds pretty great on Horror Show without quite having the requisite sizzle or magical spark to elevate the album to the A-list. What could do it, I wonder? A spot of narration by Sir Christopher Lee, per Manowar? Perhaps a spot of narration from Orson Welles, per Manowar? Maybe, just being Manowar? I kid, not even Manowar want to be Manowar these days. Besides, whilst Iced Earth might not have been able to call upon the talents of Lee or Welles, the wonderfully-named Yunhui Percifield provides co-lead vocals on 'The Phantom Opera Ghost' and she does a top job, so that's something to be celebrated. Entertaining stuff, then, rammed to the rafters with all manner of ghouls 'n' ghosts - but whatever did happen to the 'Transylvania Twist'?