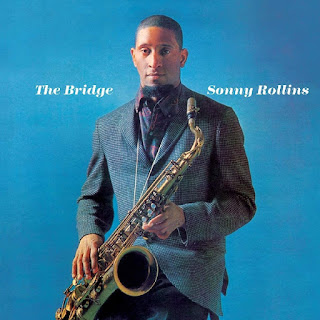 Provenance: I read an article about The Bridge and its gestation period, and decided to buy the album. Simple as that, really.

The hook to the whole project was that Rollins felt he wasn't quite up to snuff, so took a three-year hiatus to hone his craft. As he could not practice at home in his New York City apartment without disturbing his neighbours, he instead took to practicing on the Williamsburg Bridge.

Incidentally, there is a campaign to rename the Williamsburg Bridge; the proposal is to call it the Sonny Rollins Williamsburg Bridge instead. Well, why not? We commemorate all kinds of daft or evil people through statues, roads, even whole cities; let's have a significant landmark named after someone cool for a change, eh?

Review: Oh dear, once again I am reviewing jazz, without either the requisite vocabulary or knowledge to do so. Deep breaths, my boy, this isn't so tough. Just...listen to the music. And - perhaps - jot down your impressions? Don't worry too much about what some hepcat scribbled away in Melody Maker or DownBeat, and concentrate on your own inner stirrings.

Alright, it's better than good; The Bridge is pretty damn good if you're into bop. Which I am, insofar as I have just enough wherewithal to say something stupid about it in a crowded room. Whilst I couldn't ever recommend this as an entrepot into jazz - my Damascene moment came via Charles Mingus' Mingus Ah Um - for those who have been snuffling around for even a short will find much to savour here.

The best moments on The Bridge come via the two original Rollins compositions, 'The Bridge' and 'John S'. Although the playing throughout is immaculate, it's on 'John S' where guitarist Jim Hall really gets to dazzle with his fluid, kaleidoscopic fretwork, whilst 'The Bridge' features a break from drummer Ben Riley that skitters and rolls about the place, before kicking back in to the tumbling twin sax-and-guitar lines that herald the coda. Both cuts exhibit an intensity that bespeaks a restlessness; perhaps I am being overly fanciful, knowing about Rollins' retreat from the public eye, but they seem to be shouting "here I am! And just listen to this!"

There's nothing on here that one could suggest is innovatory; when this was recorded, we already had the Free Jazz by Ornette Coleman to puzzle over, and Eric Dolphy's brain-twister Out To Lunch! was just around the corner. Instead, we're treated to a kind of bop Rolls Royce, positively purring with class and assurance. From opener 'Without A Song' to the closing stroll of 'You Do Something To Me', the playing oozes taste, technique and assurance; the latter a quality that presumably Rollins did not feel he was in command of when beginning his monastic withdrawal from the jazz world in 1959. Just listening to the saxophone solo in 'You Do Something...' is confounding, as it mixes an almost bullying aggression with a wry playfulness. Certainly, not the product of someone who doubted his own talents.

It's also interesting to pause and note what isn't on The Bridge; there's no modal improvisations going on, none of the knockabout rhythm 'n' blues influence that Mingus explored so well, and hey, there's not even a piano to tinkle away or pound out big meaty block chords. What this does do, however, is elevate the interplay between the principals, most notably Rollins and Hall. Here, with bass and percussion providing a solid frame, they are able to chase each other's tail, and whilst Rollins dominates, through his quicksilver runs Hall sometimes seems to be goading his leader into a drag-race. Nonetheless, proceedings never devolve into a free-for-all; this is, after all, a serious effort, a line-in-the-sand statement from Rollins that simply says: I'm back.

The Bridge wasn't the giant step forward that one might have anticipated after Rollins' self-imposed sabbatical; looking back, though, that wasn't the point. Rather, this collection of finely-wrought music, played with seriousness and no little fire, stood as an exclamation mark in the Sonny Rollins story. Don't view The Bridge as a comeback, but rather the end of an exile, a terminus that was as emphatic as it was welcome.