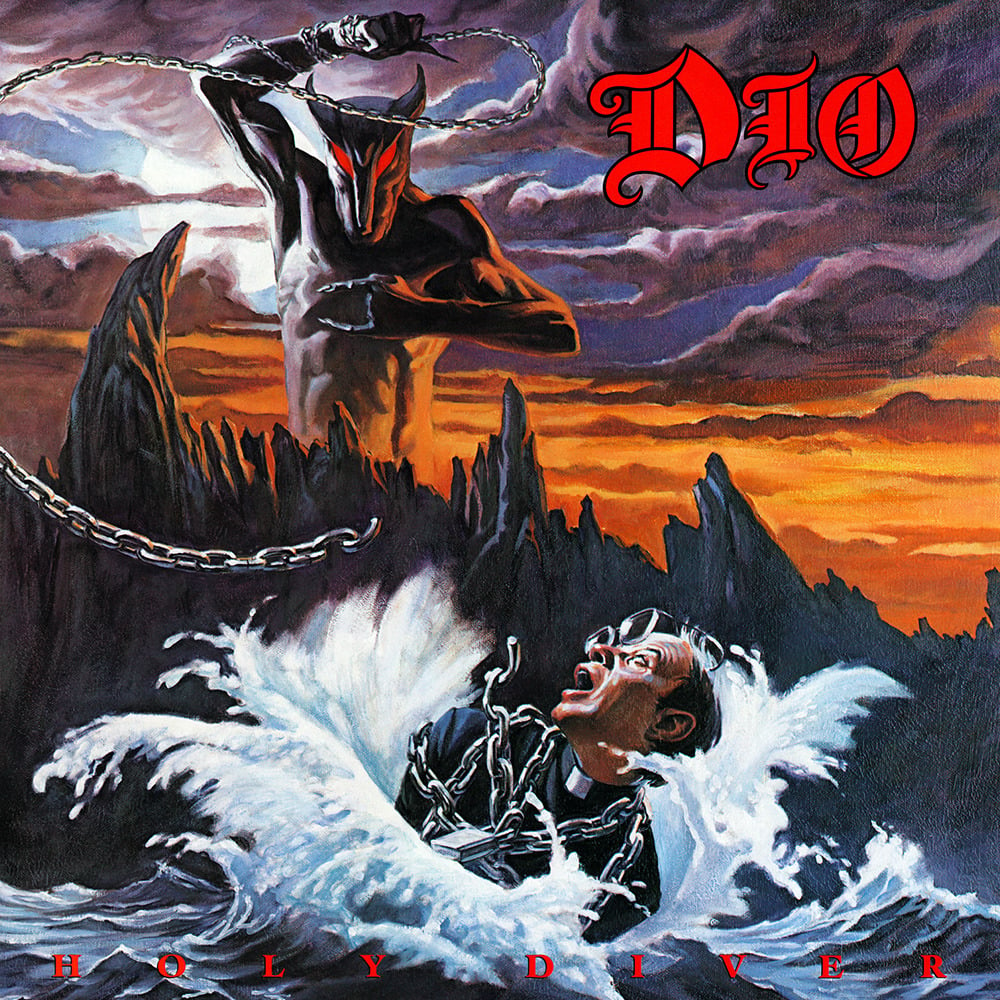 Provenance: Honestly? The first time I became aware of Dio (and, by extension, frontman Ronnie James Dio) it was due to South Park. Even then, in what was a scene played for laughs (Dio play the school prom), I distinctly recall me and my brother thinking the song being played - 'Holy Diver' - was pretty sweet.

Not too long after that, I attended a UK show on Alice Cooper's Brutal Planet tour. What a gig! Not only do I absolutely love the Brutal Planet album, but I was also treated to two stellar support acts - Orange Goblin and Dio. The Goblin rocked out, but things went up a notch when Dio hit the stage with 'Sunset Superman'. Ronnie James Dio was so, so good.

Now feels like a good time to revisit this platter as, in a rather ghoulish act of musical grave robbery, a band of former Dio musicians are about to embark on a tour fronted by a hologram of the late singer. I'm sure that'll go down well, lads, and won't look at all creepy.

Review: Here's the deal, mateys. Prior to forming his own band releasing the album under the microscope for today, Holy Diver, Ronnie James Dio had already fronted two legendary hard rock / metal bands in Rainbow and Black Sabbath, performing on landmark albums for both. When relationships went south with his fellow Sabs, he joined up with bassist Jimmy Bain (formerly Rainbow, would later die on a cruise), hotshot axeman Vivian Campbell (who'd go on to join Def Leppard, lol) and tub-thumper Vinny Appice (everyone - honestly, I may have even played in a band with him. You may have even played in a band with him) to form his own minstrel troupe. Fittingly for such a modest and humble individual, he named it Dio.

With their first album, it's fair to say, they knocked it out of the park. In fact, this release is so revered in some circles that even the seemingly minor offence of a lackadaisical performance of the title track is enough to earn you a severe beating. You don't fuck with Dio, and you certainly don't fuck with 'Holy Diver'.

Such is the magnificence of the title track that I always forget that it isn't the track the leads off the album. That honour goes to 'Stand Up And Shout', which I have to admit doesn't stir me in the same way as the rest of the material does. It whips along at a fair old clip and there's plenty of pinched harmonics in the soloing to keep me happy; ah, perhaps it suffers from its juxtaposition to the most ludicrous, imperious, mighty metal song of all...

Honest to God, you could stick this on in any metal oriented bar and cause a white-out from all the dandruff flying around due to the outbreak of spontaneous headbanging. It captures everything that is quintessential about the Dio experience; quasi-operatic vocals, nonsensical lyrics, strident guitars, RIDE THE TIGER, propulsive drumming, YOU CAN SEE HIS STRIPES BUT YOU KNOW HE'S CLEAN, serviceable bass playing and, as you can see from the embedded video above, a terrible music video. I'm not exaggerating when I say that if I were comatose or even dead, I'd start giving 'the horns' (which, incidentally, Dio claimed he popularised in metal) if 'Holy Diver' was being played to me.

(A note on the video - when it comes to terrible metal videos, a topic that is of enduring fascination to me and my pal James, 'Holy Diver' ranks right up there. Whether it's the lamest combat sequence committed to tape (1.05), the cardboard cut-out demon (1.37) or the incredibly nonchalant blacksmith (who's just forged a presumably magical sword - 2.30), it stands out in a very crowded field. It's probably not the worst, but earns its status by being associated with such an iconic track).

This isn't an album that revels in layers or textures; aside from the odd keyboard flourish here and there (but oh! What a flourish it turns out to be!), it's a fairly meat 'n' potatoes affair with regards to instrumentation. Unimaginative? Possibly, but like its near contemporary, Judas Priest's British Steel, Holy Diver's stripped-back approach works because it gives the band's most extraordinary elements - Dio's rich, stentorian, almost fruity voice and Campbell's hyperactive guitar - the space to stretch out. Such is the strength of 'Don't Talk To Strangers' and 'Straight Through The Heart' that they would still sound alright in the hands of lesser talents, but the contributions of Dio and Campbell elevate them to the status of minor classics. It's just the shame they ended up hating each other.

Two final things - first, that keyboard flourish I mentioned? It's the two-finger riff to 'Rainbow In The Dark', one of the most bad-ass tunes Dio ever did, the song 'The Final Countdown' wishes it was. The second point - and 'Rainbow In The Dark' is emblematic of this - is how RJD managed to conjure up an entire fantastical universe of wizards 'n' sorcery with a vocabulary of about thirty words. If I was being charitable I would say that Dio employed a Bolanesque, impressionistic approach to wordsmithery (that whole "hubcap diamond star halo" deal). However, so sparing is he with the actual verbiage he chooses to employ that one can genuinely play 'Dio bingo' with the band's discography.

That being said, Holy Diver deserves its place in the pantheon of metal albums. Its flash-guitar histrionics meant it fit right alongside, for example, Blizzard of Ozz (which was, of course, the solo debut by another Sabbath alumnus) but at times hearkened back to a classic 70s hard rock sound; 'Invisible' wouldn't have sounded out of place on Rainbow's Long Live Rock 'N' Roll at all. And that voice, in all its clarity and melodrama, was a wonder to behold. I was lucky enough to see Dio play Holy Diver in its entirety at my university, and later that night I got the man himself to sign my CD booklet. I put the booklet in my jeans pocket, and later in the week took those jeans to the launderette; net result, my treasured RJD autograph became a soggy, pulpy mess - an apt metaphor for some of the band's later releases. Nonetheless, Holy Diver remains a shiny diamond, like the eyes of a cat in the black and blue.
Posted by AC at 13:26