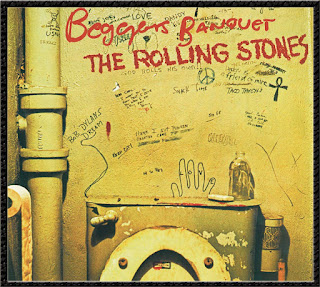 Provenance: I received this as a 17th birthday present from two friends, Stef and Amy. Pretty good going for two 16 year-olds who admittedly didn't share my taste in music.

Review: The Rolling Stones have floated around my consciousness ever since I can recall being aware of music, albeit in compilation formats. This was my first Rolling Stones studio album, and it was one of the few CDs that followed me to university. As such, I've listened to it a lot, and it's fair to say that I'm deeply smitten. However, as with many ageing partnerships, one party (me) is starting to get a little rattled by some of Beggars Banquet's peculiarities.

The first one is that I simply don't like what is probably the most celebrated track on the album, 'Sympathy For the Devil'. Just as I don't like whistling on record, neither do I enjoy the weird hooting that plagues half the track. I could possibly tolerate a few bars of hoots here and there, I'm not an unreasonable man; and I positively love 'Sympathy's...' sulphurous lyrics and the hypnotic, insistent candomble rhythm. Yet I almost find myself dreading the commencement of the hoots, because it smothers all those elements that otherwise make the lead-off number a corker. For what it's worth, those nabobs of taste and sensibility over at Rolling Stone rank this the 32nd greatest song ever, so what do I know?

The other issues I have go a little deeper than simply not liking a musical choice or two. A good fifty years and change has passed since Beggars Banquet came into being, so I wish to be careful that I don't slip into anachronism here, but I also claim it as my right in 2020 to find 'Stray Cat Blues' unpleasant. I wasn't too keen on glam-metal guttersnipes Faster Pussycat making approving noises about underage girls, and the same applies to the Stones, no matter that they're treated as the more august and accomplished act. The shame here is that 'Stray Cat Blues' is a smashing rock song, a grinding, swaggering thing, but it's completely undermined by the grim subject matter.

An extremely feeble justification, perhaps, is that 'Stray Cat Blues' is documentary-as-art, a chronicling of the spirit of the age. Because in the world of rock, vulnerable girls were undoubtedly being abused by men, many of whom we now consider to be national treasures. We're happy to (rightly) shun the predator who farted out bubblegum like 'I'm the Leader of the Gang', but less keen to mete out the same treatment to the guys behind 'Space Oddity' and 'Stairway to Heaven', whose transgressions may have been more opportunist or incidental, but which would hardly escape censure if they were carried out by the Average Joe living down the street. Will popular music face its reckoning, or are we just going to wait for these alleged abusers to die quietly?

My other big problem with Beggars Banquet is one that I feel is a little more complex. 'Prodigal Son' but just be my favourite cut on the album - a faithfully downhome recreation of Reverend Robert Wilkins' blues parable. It's the song that pushed me to try open tuning for the first time, opening up new musical vistas for this bodger. So what's my beef? Well, at what point does a tribute, or an attempt at authenticity cross over into something a tad more...problematic? The Rolling Stones made much hay from assimilating / appropriating / popularising (delete as applicable) black blues and R&B music, and in fairness to them Jagger and Richards have never hesitated to publicise the names behind the music. Undoubtedly, all blues-based music contains its own gestures and semiotics, one of which is the almost ubiquitous 'mid-lantic' voice adopted by British exponents, which I have no problem with. However, on 'Prodigal Son' it feels like Jagger takes it a step or two too far, and steps over a line into minstrelsy. One can be generous and hope that the intentions were pure, but the fact remains: it's an uncomfortable listen.

I always think of Beggars Banquet as the most bluesy of the Stones' albums, but closer examination suggests that only about half the joints qualify. We've got the aforementioned 'Prodigal Son', the grisly 'Parachute Woman', 'Dear Doctor' and the beautiful, pining 'No Expectations'. Maybe my mistake is down to these being my personal picks. Nothing else, aside from 'Sympathy For the Devil' is bad, but 'Jig-Saw Puzzle' floats by a little and the country gospel closer 'Salt of the Earth' feels a mite wan and insincere for my tastes. There's no fucking with 'Street Fighting Man' though, which contains a bit of welcome bite and snap, plus the cryptic lyric 'Well now what can a poor boy do / 'Cept for sing in a rock 'n' roll band / 'Cause in sleepy London Town there ain't no place for a street fighting man'. I wonder whether, given the unrest on the continent, and the protests against the Vietnam War in America, Jagger and Richards weren't throwing a couple of jabs at the relative torpor of London? The Stones do politics, eh?

I'm sorry I haven't talked about the music so much here, because much of it is really fun. Beggars Banquet is loose, shambling and a bit scruffy in places, but hangs together through will and personality. It also contains good examples of what Keith Richards called 'acoustic glue' in his autobiography, essentially keeping an acoustic guitar strumming away whatever is happening out front in a bid to force some cohesion to proceedings. If you can stomach the shit bits, Beggars Banquet is otherwise a tour-de-force of British R&B. It's a big 'if', though.
Posted by AC at 05:07