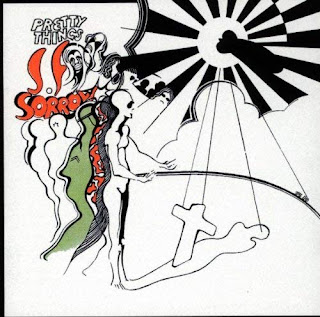 Provenance: I can't imagine I bought this album without reading about it somewhere. It's very possible that it's another Classic Rock job, although what works against that theory is the fact that I like this album.

Review: I like this album, I love this album, and I think I instinctively knew I'd regard this as something special the moment I heard the weird bent note that serves as an introduction to S.F. Sorrow. As with many wonderful 1960s offerings, where the studio became a playground of the imagination, on this collection the Pretty Things conjured up a raft of sounds that I've yet to hear on any other recording. Thus, I can identify the song 'S.F. Sorrow Is Born' within about half a second.

It's worth noting at this stage that, alongside being a landmark in British psychedelia, S.F. Sorrow is a concept album - maybe the first concept album, as we recognise them, inasmuch as the songs are thematically linked and a narrative flows throughout. As with many of their counterparts dipping their two in the lysergic end of the pop spectrum, a debt is owed to Lewis Carroll's prism of surrealism. However, the biggest IOU needs to go to the Beatles. The Pretty Things went through quite some metamorphosis to reach this point; their first two albums were raw, almost troglodytic R&B, but third album Emotions combined this with a strain of freakbeat. S.F. Sorrow feels like a further filtering of sensibility, a dawning craftsmanship to go with their undoubted energy. Also thrown into the mix is Edwardiana, which no doubt coloured the decision to shape this album around the Great War.

As with the Small Faces, the Beatles, the Hollies and especially the Kinks (who would also look backwards with The Village Green Preservation Society and Arthur (Or the Decline and Fall of the British Empire)) there is a sensibility to all this that is peculiarly British - again, perhaps derived from the readiness of the Beatles to place Music Hall influences front and centre in their music. Even when sung in the mid-Atlantic voicing unique to popular music, it sounds British - nay, English - and never more so when you're yanked back to this dreary little island by accents that seem to have faded somewhat over the past half-century. The verses to the wonderful 'Baron Saturday', for example, are sung-spoke in an uptight, campy sneer that's most reminiscent of Peter Cook (of all people), whilst the plummy voice reading the names of those lost in action at the end of 'Private Sorrow' sounds like it belongs in a museum.

(It's probably worth a quick synopsis of the plot - halfway through my review (I'm good at structure!) - as far as I can make out: a boy called S.F. Sorrow is born; meets a girl; serves in the trenches; is then due to be reunited with the girl who is travelling to meet him on an airship that suffers the same fate as the Hindenburg; and finally, overcome with grief, retreats into a bizarre internal world until he dies alone.)

It can't be overstated how much of a sway the Beatles of Sgt. Pepper has over this album. Both 'She Says Good Morning' and 'Baron Saturday' feature choruses that would bring nods of approval from Lennon and McCartney, whilst 'Bracelets of Fingers' (superb title) starts with a harmonised intro of blissed-out "love, love, love" that suggests to the listener that, perhaps, love is all you need. However, whilst on Sgt. Pepper's Lonely Hearts Club Band the Beatles' emotional lexicon ran as far as bittersweet, the Pretty Things embrace full on bleakness. 'I See You', a number that ebbs and swells like the Moody Blues at their most stately, describes a mind succumbing to dementia, and the pulsating 'Old Man Going', underscored by some Black Sabbath guitar (yes, really) is simply harrowing. The last few tracks on S.F. Sorrow are unutterably dark, and prefigure the boom of downer rock that signalled the sunset on the Age of Aquarius brought about by Altamont and too many bad trips.

However, if I've made it all sound rather derivative, don't be fooled; there's magic on this album. I mentioned Lewis Carroll early on, but the quasi-nonsense lyrics also tip a wink to Edward Lear (and there's even a mention of a 'runcible spoon' in 'Baron Saturday', the sneakiest track on here). As mentioned before, 'Old Man Going' does sound like an ur-Sabbath at times; 'Balloon Burning' feels like a journey to the centre of the mind with its nagging, horror-show lead guitar; and perhaps best of all is 'Private Sorrow', which combines a doddery martial beat with vocals so guileless and wide-eyed that the shrapnel flying overhead transform into objects of kaleidoscopic wonderment.

It would also be remiss of me not to return to the ultimate track on S.F Sorrow, which as I mentioned earlier, completes a trifecta of misery. Yes, 'Loneliest Person' is a glum meditation on solitude but it is also the most beautiful acoustic ballad I can recall hearing in a long while, flickering briefly like the flame of a matchhead before disappearing into smoke and silence.
Posted by AC at 07:31