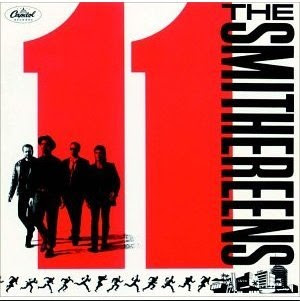 Provenance: I'm screwing my eyes up in concentration here as I struggle to work out how I've ended up with only one Roy Harper but three Smithereens albums at the time of writing. Hell, I have two (should've been three) Autograph albums.

There's a mere wisp of an idea blowing around in my brainbox that it relates to a message board thread about great local bands who never really got the national exposure they were due. I believe the Smithereens received a couple of mentions from New Jersey based posters; enough to pique my interest at any rate. Autograph aside, that message board's hit rate has been decent, and evidently Smithereens albums weren't exactly going for a king's ransom as I bought three in one fell swoop.


First impressions aren't good though, are they? That's some really desperate cover art. Why they even went with an Ocean's 11 theme is mystifying, as there's nary a hint of Rat Pack to be found anywhere in the Smithereen's back catalogue, as far as I'm aware. The only thing I can think of is that the New Jersey-based band shared a home base with some of the Chairman of the Board's friends, associates and acquaintances.

Review: Not bad. Not the kind of thing I would usually go for, but 11 is listenable enough to be on my iPod as a change of pace.

How would I describe the sound of the Smithereens on 11? They are right up there in the 'superior bar band' category that is topped by the E Street Band, and often includes acts such as Tom Petty & the Heartbreakers and Graham Parker & the Rumour. Definitely, then, an impression that this is music played by blue collar strivers, though with less of the soul influence than some of the acts in the genre. You could also say that they're college rock-adjacent, though at the noisier end of the spectrum; you could imagine the Smithereens playing on a bill with Camper Van Beethoven before slinking off to the bus to listen to AC/DC. Lastly, there's a discernible power-pop strain to 11, as most of the tracks are built around strong, catchy melodies.

So, some nice influences in the mix, but the fact that I can so readily locate them probably contributes to why they were never world beaters - a lack of originality. Undoubtedly decent crafters of song, the Smithereens just lack that spark or originality or a signature twist that says "this is a Smithereens record." No great shame in that at all. Instead, we get rock music with its foundations on display, rendered here very competently, sometimes superbly, and almost always enjoyably.

Oh, oh, I'm so downbeat! Look, here are the good things - firstly, singer-songwriter Pat DiNizio devotes himself to writing about love and loss in an admirably single-minded manner. Romance is always a good topic in popular music, and it's served very well here on the quieter tracks such as 'Blue Period', tracks that invariably use the cool major-minor trick I consider to be the hallmark of all the best love songs. I've been listening to a lot of 1960s pop recently, and I'm hearing a lot of what makes the best of that era so appealing; alongside the cute chord changes, there's some neat harmonising and judicious use of female backing vocals to be found - 'Baby Be Good' features all three.

The late DiNizio also wins out as the front for all this material, as he sounds like the kind of guy who had his heart broken a few times. He can sound defiant, such as on the stadium rocker standout 'A Girl Like You', but mostly he's the friendzone incarnate. Perhaps not the most flattering characterisation, true, yet 11 would suffer if the Smithereens' singer was some alpha-male heartthrob. All this comes to a head on the curious 'William Wilson', which despite being in possession of an ambiguous lyric, comes across like a Gen X retread of the Kinks' hero worship number 'David Watts'. (DiNizio's own explanation of 'William Wilson' hardly helps - it's variously about Brian Wilson, an Edgar Allan Poe story and the founder of Alcoholics Anonymous.)

Another point in the Smithereens' favour is that 11 benefits from a punchy, chunky production sound. Just as the best power-pop often possesses a hint of venom amidst all the prettiness and candyfloss, DiNizio's wimpy descants strut from the speakers like puffed-up beachfront beefcakes. It's all rather larky!

It's just a shame, then, that even on such a short collection - it clocks in at under 35 minutes - 11 runs out of puff on the last two numbers. Firstly, 'Maria Elena' features what sounds like an accordion. I don't even care if it isn't an accordion (I think it is), I dislike accordions in rock music almost as much as I dislike whistling. Leave accordions to zydeco musicians, French street performers and Peter Sarstedt, that's what I say. Finally, 'Kiss Your Tears Away' means that 11 wheezes to its conclusion - no amount of jangly, raga-inflected guitar can save what is a soporific and low energy workout, even if DiNizio is at his most sensitively simpering best. My advice would be to skip back to the start and give 'A Girl Like You' one final blast - it's just that good.
Posted by AC at 07:45