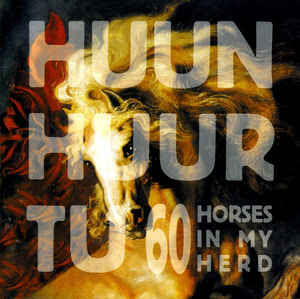 Provenance: I developed a fairly low-key interest in throat singing after watching the amazing documentary Genghis Blues. Did a bit of research and Huun Huur Tu were a name who kept cropping up. They are from the Russian federative state of Tuva, a south Siberian state that borders Mongolia - which is where the action of Genghis Blues happens to take place.

I don't really know a whole lot about wealth and status in Tuvan society, but I'm guessing that 60 Horses In My Herd is quite the brag. I don't even own a single horse.

Review: I have never been to Tuva. I've seen one documentary that focused on a very specific practice - throat-singing traditions - and I own a couple of albums featuring music from the region. I know nothing of the place, its language, its people and possess only the most minuscule appreciation of its music.

It's very easy, I imagine, to put on an album like 60 Horses In My Herd, close one's eyes and visualise mounted warriors in elaborate costumes sweeping across the rolling steppe. That's the kind of trick music can play on you. One thus conjures up a world of freedom, open plains and endless horizons; what doesn't come through are the bald statistics, such as Tuva being the state with the lowest life expectancy in Russia, or the problems relating to alcoholism in the region.

We're all prey to this though, aren't we? One or two parps into an oompah number and it's all lederhosen and foaming steins of bier for me; gimme a hint of slide guitar and I'm in the Mississippi Delta (albeit, this is a place I've actually visited). I wonder - do non-Brits experience this with regards to England? What kind of mental imagery is wrought by the Beatles, Shakespeare, Doc Martin? And does the inevitable, disappointing reality of out-of-town shopping centres and fights in pub car parks invoke a domestic variant of Paris syndrome? Answers on a postcard.

I do understand that the soaring eagles and smoking yurts I picture when listening to Huun Huur Tu aren't real, but a part of me thinks "why not indulge?", because from about 1944 Stalin's administration really did a number on Tuva, ushering in a period of persecution against Buddhist and Shamanist practitioners. In addition, collective farm policies and centralised directives around agricultural productivity were brought in, which clashed with the nomadic lifestyles of the Tuvan people. This was, in sum total, little less than an attempt to destroy a centuries-old way of life - and for what? Cattle yields?

Perhaps, then, if I get misty-eyed when I hear the keening of an igil or the still-remarkable 'sygyt' style of overtone singing (hard to describe, but a kind of springy whistle sound), I shouldn't feel so guilty. Music is supposed to be bigger than we are, after all. It's not wrong, says I, to think of verdant pastures when one hears 'Jerusalem', or to picture the tumbling blue peaks and deep hollows of Appalachia when you hear the music of Dock Boggs or Ola Belle Reed. One of the most exciting aspects of music is that it takes you to places that you've never been to, or might not even exist.

It's difficult to talk about highlights of individual songs when one's knowledge is so slim, but 'Kongurei' evokes a rare, delicate air of mournfulness; 'Tuvan Internationale' uses 'kargyraa', a low, rumbling chest voice, as a drone throughout, making it sound like one of the more doomy Ennio Morricone spaghetti western compositions; and 'Ching Soortukchulerining Yryzy' is a rhythmically hypnotic number that features a variety of singing styles but starts off sounding a little like Mike Oldfield's 'In Dulce Jubilo'. Mostly, though, 60 Horses In My Herd is a beguiling window into a universe of sound so remote from what I am used to that, when I first heard Tuvan music, I was left in something akin to a state of shock. That's no bad thing where art is concerned.