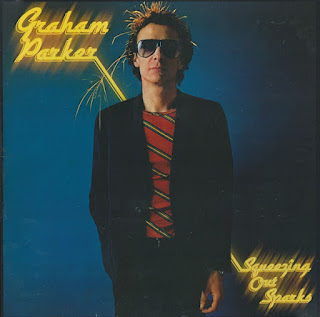 Provenance: A very solid review in a magazine convinced me to buy the remastered, reissued version of Squeezing Out Sparks. But why? Prior to sticking this in the CD player, I'd never knowingly heard a single Graham Parker track in my life.

Sometimes you just have to take a chance, right?

Review: From a sight-unseen punt, this has become one of my all time top-ten albums. It may not be the most musically virtuosic, Parker might not be the best singer, and there's precious little here to bother the charts; nonetheless, permit me to reach into my bag of cliché here, because little sums up Squeezing Out Sparks better than 'greater than the sum of its parts'.

Which isn't to say that some of those elements I've already highlighted aren't up to snuff. The Rumour are a no-frills unit but as tight as a Skyscanner-sourced airport transfer, honed as they were in numerous pub-rock outfits in the same London scene that gave a home to acts as disparate as Ducks Deluxe, Kilburn & the High Roads and Dr Feelgood. The album came at a time when a lean, stripped-back approach was in vogue, though on Squeezing Out Sparks it's enlivened with touches of New Wave twitchiness and Parker's natural inclination towards soul music.

On that point, Parker is, one feels, a blue-eyed soulman trapped inside the larynx of a punk-rock snarler. What emerges is an angry, sneering voice that still achieves a kind of brawling musicality, a triumph of energy over technique. However, it's as a songwriter that Parker really intrigues, and on Squeezing Out Sparks he comes close to greatness with his vituperative and peculiar perspectives on life. Only his hardwired idiosyncrasies prevent him from achieving a universality, but I would argue its precisely his weirdness that sets the album apart.

To pose a few examples, we're treated to the disorienting 'Discovering Japan', which condenses a recent tour experience into impressionistic, fragmentary surrealism; the seemingly sincere desire to learn about extraterrestrial life on 'Waiting for the UFOs'; and the steaming paranoia of hard rocker 'Protection', probably my favourite track on the whole album. You can feel your skin tighten as the song proceeds, which starts with a throwaway dismissal of Winston Churchill and ends with a demented "You wanna hide? You wanna hide? You wanna - hide, hide, hide?!". Put simply, despite its relatively conservative formal trappings, I've yet to hear anything quite like Squeezing Out Sparks.

In terms of the best songwriting on the platter one must head to 'You Can't Be Too Strong', a gentle ballad that contains the album's title in its lyric. It happens to be about abortion - furthermore, you're left wondering (if the contents of a popular song are to be believed) quite where Parker stands on the issue. So often, such an emotive subject is presented in song as either pro- or anti-, but here Parker slips through the cracks, and through documenting the ambiguities around abortion creates something quite unsettling - and masterful.

The version of Squeezing Out Sparks I bought contains two bonus tracks, which I don't usually include in reviews but they're too irresistible to gloss over - 'Mercury Poisoning', a delightfully acidic jab at his former record label wrapped in a horn-powered rocket of a track; and a very decent cover of the Jackson 5's 'I Want You Back', lending the song a toughness that doesn't exist in the original. Cherries on top, really, as even without these two belters Squeezing Out Sparks is a genuine masterpiece, larded with spite, jealousy, wonderment, confusion and, every now and then, a hint of joy.

Oh, and if you don't believe me that Parker is a bit of an eccentric, you're more than welcome to head to his website and check out his novel, The Thylacine's Lair (name of the protagonist: Brian Porker).