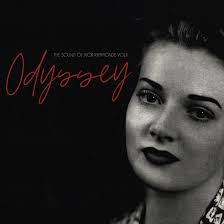 Provenance: I bought this at Resident Music in Brighton (no trip to the city is complete without a visit) as a little birthday gift to myself this year.

I could leave it at that, if I'm honest, but that would be cheating. However, if you don't track a copy of this curate's egg down (it's even on Spotify) before reading on I'd seriously urge you to consider your life choices.

There are, really, three types of albums I end up reviewing on this blog. The easiest of the lot are those that are utterly rancid, because the job is to simply give 'em a shoeing. Then there's those that possess a hard carapace of inadmissibility, either because they are baffling or I'm delving into a genre that I'm not hugely conversant with. The challenge here is to try to get into a headspace to make some form of semi-comprehensible assessment, and to relax about my lack of omniscience (but I'm getting there, folks).

By far the most difficult are albums I like. I find I fall into a kind of set rhythm for these pieces, lavishing praise whilst desperately searching for some hook or wrinkle so that I may introduce some grit into the oyster. Worst of all are albums such as today's offering, Odyssey, which in my estimation is almost faultless. I feel a hesitancy to waste words, when a simple exhortation to listen to the bloody thing should suffice.

So: this is the second volume of songs arranged or produced by Ivor Raymonde (father of Simon Raymonde of the Cocteau Twins, who demands credit as the album's compiler), mostly culled from the 1960s. On the basis of these twenty-five tracks alone, one must conclude that Raymonde pere was one of those semi-mythical beasts within the music industry: the man with the golden ear. From cowlick rock 'n' roll through to Philly-style soul and all pop points inbetween, Odyssey is a kaleidoscope of sound and a sumptuous testament to Raymonde's genius as an arranger.

The one commonality that exists betwixt and between the selections on Odyssey is the absence of rough edges. Probably the closest we get to anything vaguely edgy is the strange, wonderful acid rock-lite of Twinkle's previously unreleased 'Michael Hannah'. However, if you feel that denotes a kind of staidness or politeness, think again; for bubbling under the surface of many of these cuts is a simmering, smouldering passion that every now and again threatens to boil over. Por ejemplo: the throb of the bass propelling Los Bravos' 'Brand New Baby', or the brass punching and pummelling its way to the front of the mix in the Alan Price Set's enjoyably gusty, knockabout take on Randy Newman's 'Simon Smith and the Amazing Dancing Bear'.

What does come through loud and clear, to me at least, was Raymonde's love of the human voice. It didn't hurt that he worked with some of the best - Roy Orbison, the Walker Brothers, Dusty Springfield - one feels you just had to give them a nudge and sit well back. Springfield's track, 'Little By Little', is a juggernaut, her ice-cool delivery rubbing up against incandescent horn charts to stunning effect. There's a sense that the impeccable framing that Raymonde helped to provide could be a space where an artist was allowed to subsequently cut loose, if they so desired; Susan Maughan conjuring up the mettle of a young Helen Shapiro on 'That Other Place'; the lisping sensuality that ignites The Cryin' Shames' 'Please Stay'; and the brawling, grunting run at 'Loo-Be-Loo' that makes the version by The Chucks so damn fun.

The true highlight of the vocalists, however (and this isn't to dismiss Kathy Kirby's mountain-sized crescendo on 'The Way of Love') is the truly demented 'Tower of Strength' by Frankie 'Mr Moonlight' Vaughan, which I've mentioned before now (or rather, left the heavy lifting to the scribes of Freaky Trigger). It bears repeating, though, that this absolutely fucks anything Tom Jones did out of the water. One can picture Vaughan writhing around on the studio floor as he forces every iota of his being into powering this most electrifying slice of soul, albeit in an almost unrecognisable format. Recorded in 1961, it feels like a moment where a quirky British offshoot could have developed, before the genre was fully submerged, as per one commentator on Freaky Trigger, into the musical vocabulary of its American originators.

Friends, there are treats everywhere! Check out Marty Wilde hiccoughing his way through the rockabilly drama of 'Endless Sleep', the warm, buzzy psychedelia of Christopher Colt's 'Girl In The Mirror' or the Martell's 'Time To Say Goodnight', and get blown away by the barmstorming rhumba-on-steroids of Paul Slade's 'Odyssey', after which this album is named. The last cut is hot, hot, HOT!

How to sum it up? Well, once I've finished tapping away at my keyboard, I shall go back to the beginning and listen again without the burden of trying to add words. The world of Odyssey is a fully realised dreamscape, a place where two-minute pop is elevated beyond its inherent strictures into a realm of sheer emotion. It's rich, too. Imagine getting smashed at a wedding on dessert wine and propping up the chocolate fountain all night, and you might be halfway towards experiencing the pure glut of confection Odyssey provides.

Resident Music didn't have volume one, titled Paradise, in store when I visited. Guess what's on my Christmas list? Let's hope I've been a good boy!