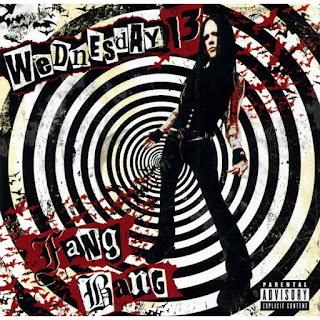 Provenance: My time at the University of Exeter was largely pleasant, but being out in Devon meant for slim pickings on the rock front most of the time. The one oasis was the Cavern, a vaulted cellar in the centre of town where I saw acts like The Answer, My Ruin and today's subject, Wednesday 13.

In fact, I think I picked this album up after seeing the erstwhile Frankenstein Drag Queens from Planet 13 and Murderdolls frontman (not to mention his stint as a Faster Pussycat tour guitarist!). Wednesday 13 wasn't really my cup of mud, but when you're drowning in a sea of Newton Faulkner and Mr Scruff, you seize anything resembling a life raft.

Later, this would also extend to frequent trips to a Monday night goth night run by a living skeleton named Francis...but I'll save the story for when I review Judas Priest's Turbo.

In any case, Wednesday 13 put on a raucous live show, and I spent the night quaffing cheap beer with good friends, so all in all a massive success. I bought this more as a keepsake from a cracking night out, rather than an album I knew I'd get a lot of replay value out of. Years have gone by since that gig and I haven't spun Fang Bang (great name) very much at all, so it's due a reappraisal.

Review: If the name Fang Bang wasn't enough of a giveaway. song titles such as 'Morgue Than Words', 'My Home Sweet Homicide' and 'Happily Ever Cadaver' should give you a clue that this release is kindred spirits with Rob Zombie and mid-era Alice Cooper; good, wholesome, comic-book and MGM monster movie fun. However, unlike the industrial-powered ramalama of Zombie or the spray-glam of Cooper, Fang Bang is anthemic pop-punk with a sleazy edge.

And so I ask you, faithful reader, have you oft seen me extolling the virtues of pop-punk on these pages? No, you haven't. The closest I've come would be my encomium to Sloppy Seconds and their mighty Destroyed album, with which it shares some of its ghoulish sci-fi sensibility. That said, Destroyed works as a clever-stupid, ramshackle, knockabout celebration of all life's most egregious sins, and remains very much an outlier in my collection.

Fang Bang simply isn't as cute, clever or as charming as Destroyed (but what is?); but I'm surprising myself with how easy it's going down. Songs all blend into one, and as catchy as they can be - especially at the choruses - they're all just one hook short of being proper earworms. One feels that if Cheap Trick or the Wildhearts got to grips with these tracks they'd wind up with just the right amount of acid and saccharine. Still, 'Faith In The Devil' has got a nasty bite, and you'd have to be a fucking sadsack not to smile at the 'oi oi oi' section in 'Happily Ever Cadaver'.

I don't really know what else to say - everything rushes along at a nice clip, as it should, and production bears all the hallmarks of the early 2000s, which has never been my favourite era for capturing noises. One plus is that Wednesday's raspy sneer fits in with the loud 'n' compressed flavour of the age - of all the other singers I'm familiar with, he most resembles his former employer in Faster Pussycat, Taime Downe. It lends a suitably cloacal aspect to mascara-and-glitter smeared proceedings, although it has to be said that his range stretches about as far as Russell Grant attempting to dunk a basketball.

But, look, if you can't raise a smirk to a song called 'Buried With Children' (which is really good, in fairness) and the lyric 'I've got blood in my alcohol system' doesn't make the corners of your mouth twitch, I can't help you. This is rambunctious Hot Topic splatter-punk with no little heart and a smudge of dark glamour besides. Fang Bang may not quite blast the rafters on a sedate Sunday afternoon, but crank this in a poorly-ventilated sweatbox with £2 Carlsbergs on offer and you've got the recipe for a helluva good, gruesome time.