The Psychedelic Sounds Of... - The 13th Floor Elevators 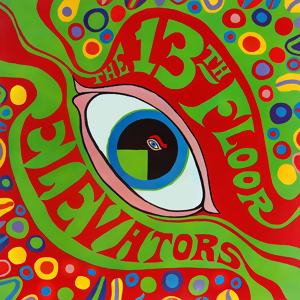 Provenance: Along with every other right-minded person, I own a copy of the greatest compilation album ever put together, Nuggets: Original Artyfacts from the First Psychedelic Era, 1965-68. On an album freighted with highlights, there are still some tracks that manage to break on thru' to the other side: the dark mood of the Electric Prunes 'I Had Too Much To Dream', 'Lies', a spot-on Beatles pastiche, by the Knickerbockers, and the swirling, propulsive 'Open My Eyes' by the Nazz, a group featuring the young Todd Rundgren, are all primo brainbenders.

And then there's the bizarre 'You're Gonna Miss Me', almost in a category of its own, coming on like a diesel-propelled jug band piloted by a clutch of lunatics. Who wouldn't want a slice of that action? Anyway, I whacked a 13th Floor Elevators album on my Christmas list, and Santa was obviously feeling pretty hip that year because he brought me an Elevators box-set down the chimney!

Review: The Psychedelic Sounds... opens up with the inimitable 'You're Gonna Miss Me', and even though I've heard it countless times, it still elicits a small dopamine rush as the first four chords crash in, a tug on my cerebral cortex that here be something a bit special. What a tune! What a manifesto! Two and a half minutes of dementia filtered interpreted through the medium of white-knuckle rock 'n' roll. There are so many things to pick up on; the slashing guitars, Roky Erickson's snotty punk vocals, the perfect gem of a harmonica solo - but one other element both shines through and yet sits utterly apart, and that's Tommy Hall and his electric jug.

This most untraditional of rawk instruments is all over Psychedelic Sounds; furthermore, it's not used to underscore the rhythm, as it is in folk, blues or skiffle setups (or, say, on Mungo Jerry's superb 'In The Summertime'). Instead, it clucks away like an insane chicken, providing at times an almost sawtooth effect, weaving in and out the churning beat of the bass and drums. So startling is this effect, one briefly wonders why jug wasn't more commonplace in rock 'n' roll, until you realise that the way it was deployed was unique to the 13th Floor Elevators' sound. They made this hyperactive jug-boogie entirely their own.

Of course, imitators are also hard to spawn when nobody listened to your the first time around.

Coming at the lysergic dawn of the psychedelic era, it has to be said that Psychedelic Sounds does not bear much resemblance to the stately patchouli 'n' paisley aural washes that would come to dominate the scene (albeit I think the ultimate psych track is the aforementioned 'Open My Eyes', which is drenched in phasing effects and features a cool 'wig out' section). Castin about for comparisons, I consider the first couple of Pretty Things - another band who would make a big psychedelic splash - discs to be kissing cousins to this bad boy. They are all rawer than steak tartare, all feature nasty sub-surf guitar tones that prefigure the Cramps, and in Phil May the PTs had a singer willing to sound every bit as malicious as Erickson.

But! The Pretty Things didn't have no jug, and for the most part they played their blooz straight, whilst Psychedelic Sounds brings the weirdness. It's instructive that in an age of sampling, digital recording and guitar pedal setups that rival the bridge of the SS Enterprise for complexity, little recorded in recent years sounds quite as uncanny. The spirit of the age was to push the available tools to their limits (I think now, incidentally, of how nothing has ever since come close to the noises Joe Meek magicked into existence from the spare room in his flat). Perhaps, also, the murk of this album's production comes into play. The miasma oozing out of the speakers sounds, frankly, amazing, as every now and again some bass pulse, or shard of guitar, will unexpectedly push through the gloop of distortion, a random visitor from another frequency.

I haven't really named tracks, so if you're the sort who is partial to a spot of Spotify browsing here's a few artyfacts to get you going: 'You're Gonna Miss Me', naturally; the lurching, doomy bad trip nightmares of 'Reverberation' and 'Kingdom of Heaven'; and possibly my favourite track in their catalogue, the gleefully bonkers 'Fire Engine', a journey to the centre of the mind accompanied by the primal whoops and howls of home-made siren noises. Blast it at midnight and the neighbours will complain; keep blasting until sun-up and they will end up worshipping you. This is potent stuff!