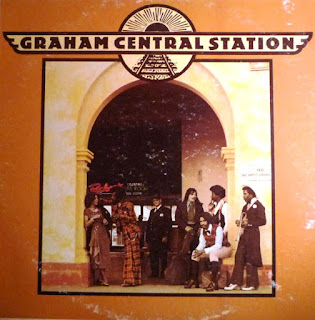 Provenance: This one came from a discussion I had with my father-in-law about funk; we were chatting about Parliament, the Jimmy Castor Bunch, the Ohio Players (as you do) when almost as an aside he admonished me not to forget Graham Central Station.

Forget? I'd never heard of them. But I had heard of Larry Graham, the bassist for Sly and the Family Stone - so here it is, the band he formed after quitting the hugely influential psych-soul pioneers. Graham's lived a life - Sly, GCS, introduced Prince to the Jehovah's Witness faith, and it turns out he's the uncle of Drake. According to Wikipedia, Graham was also a pioneer of the slap bass technique, so we've got this dude to thank for Victor Wooten and Mark King.

A quick Google and it became apparent I could buy one of those bargain collections of five studio albums for about eight quid. It virtually purchased itself, right?

Incidentally - the name Graham Central Station is a pun. In American English, it sounds like 'Grand Central Station' as 'Graham' is often elided into one syllable. Despite being married to an American for eight and a half years (and counting), I still experience some discomfort with this fact. I have sincerely spent a whole vacation looking for 'Gram crackers', only to find consolation in what I took to be a knock-off brand called 'Graham crackers' (just like Dr Pepper had a rival, Mr Pibb, who was presumably a consultant surgeon).

To my non-American friends, I'll leave you with this warning; however you imagine 'Louisville' to be pronounced, prepare to be surprised.

Review: What a charming way to begin the album! 'We've Been Waiting' is a group acapella number, where they basically say how much they're looking forward to entertaining you, the listener. I'm not opposed to this kind of gimmick, one that Graham Central Station (spoiler alert) repeat on their second album Release Yourself, a track that introduces each member of the band with their own little slogan. It also features the chewiest synth tone ever produced, so give it a whirl right now because I won't be reviewing that bad boy for a while.

Is this a 'thing' in funk music? There's a little bit of this carry-on at the beginning of Parliament's incredible Mothership Connection, and the aforementioned Jimmy Castor Bunch do a funny turn in the same vein on their quirky jam 'Potential'.

So what's the deal with Graham Central Station? My first reaction is that it's good, solid funk. It doesn't contain the hyperactivity of James Brown, the sci-fi weirdness of Parliament or the lasciviousness of the Ohio Players, but it does encapsulate something I often say about Nils Lofgren, which is that good singin' and good playin' can get you a long way down the path. Also, at the beginning on 'judge not, that ye be not judged' sizzler 'Hair', there's a cool slap bass intro, so that box has been ticked with a big fat permanent marker.

For the most part, Graham Central Station is mid-paced soul-funk buoyed by quavering string arrangements, fun horn parts and gang vocals. The slower moments can sound a little like Johnny 'Guitar' Watson's Funk Beyond the Call of Duty (my favourite instalment in the Call of Duty franchise) without the humour (GCS are an earnest bunch), which is no bad thing. Singer Patrice 'Choc'Let' Banks gets featured solo spots on 'Why?' and 'We Be's Getting Down'; on the latter Banks does an especially scintillating job, her elastic vocals pushing against a grinding rhythm to fine effect.

What Graham Central Station lacks is a proper knockout punch. There is not a bad bit of music on the album, but neither is there anything that makes me immediately want to skip back and listen to something again. This needs a 'Summer Breeze' or 'That Lady' to properly elevate it into the top ranks; hell, even less successful acts like the Cate Brothers (identical twins, love it, love it) always had one ace up their sleeve per album, like the driving 'In One Eye and Out the Other'. GCS come close - 'Hair' is probably the best realised song - and indeed, it was a minor hit - but 'Can You Handle It' has a strident, imposing chorus that just needed to be wed to a more inventive verse, and 'People' has a guitar solo that's so fucking sick you wanna weep. Is that Freddie Stone playing?

As I said at the top, I got this alongside four other GCS albums for about the cost of a drinkable pint in London, so I can't complain. For me, this isn't heavy rotation material, and in truth it has dated somewhat. It suffers in comparison to more distinctive and high-energy contemporaries, and its serious-minded messaging of uplift and positivity is suffused with the spirit of an age that has passed by. Nonetheless, it's not bad - hell, it's good stuff - and Graham Central Station's albums would get better. It pays to tread carefully with recommendations from a guy who likes Bob Dylan's 1980s output, but here I have to hand it to my father-in-law for a very decent heads-up.