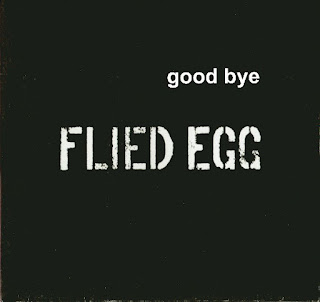 Provenance: The ol' noggin ain't what it used to be, so no amount of staring into the black depths of this slightly forbidding album cover will lead to an eureka moment, I fear. However, it's certainly a pre-Spotify purchase, which leads me to two hypotheses:

2. (The most likely) I read about a band called Flied Egg and thought "I'd better get a piece of this".

It's a strange name for a band, right? Flied Egg. It turns out they were a Japanese outfit from the early 1970s, so it's either with a degree of irony or defiance that they took their language's difficulty with distinguishing between 'l' and 'r' and flipped it into a quirky handle. One feels that in our more enlightened (I say, the day after hordes of people marched in London against a make-believe Satanic cannibal paedophile (or should that be paedophile cannibal?) cabal) age such a name might be consigned to the 'bad idea' pile fairly swiftly, but who knows? If anybody has the right to lampoon Japanese speech patterns it's Japanese people themselves, and to me it feels like a nice mixture of absurdity, self-deprecation and spikiness. Is that reflected in the music, eh?

Review: Here's one of those curios that seem to have gone extinct, alongside 'hidden tracks' and CDs that you could turn over to the watch a music video - the half live, half studio effort. Good Bye starts with a bit of a bummer, as an MC announces that 'this show is going to be recorded, and will appear on the final LP this band will be released'. Yeah mate, not quite 'you wanted the best?! You got the best!' or 'on your feet - or on your knees!', but I should mark it up for being factually correct (this was Flied Egg's second - and final - album) and creating a sense of occasion.

Unfortunately, the first couple of tracks aren't anything special - aside from some peculiar wailing in the backing vocals department, it's fairly pedestrian 'eavy blooz rock in the same vein as Bachman-Turner Overdrive or Grand Funk Railroad. A fairly pointless cover of B.B. King's 'Rock Me Baby' follows - I already have superior versions by King, Robin Trower and myself playing into a dictaphone to fall back on. The soloing is energetic enough but quite generic; it has none of the identifiable quirkiness of King's restrained, vibrato-rich style or the artistry of Trower's mind-bending, feedback-soaked real-time deconstruction of the blues.

Another fairly muddy track closes out side A, but this time we're treated to a boring drum solo and some meandering nonsense on guitar. It's all very 1972 - an era where bands seemed to confuse lengthy jamming with fun, interesting music. Nothing to me sounds more brain-achingly langweilig than watching Jimmy Page stumble over his fretboard for half an hour in some godforsaken concert arena in the Midwest, but apparently people went nuts for this kind of bullshit. At least on studio albums, bands like Zep and the Allmans were largely constrained by the format, but you check out something like Deep Purple's Made In Japan and see twelve and a half minutes of 'Child In Time' or, heaven forbid, twenty minutes of 'Space Truckin'' and your fucking spider senses are tingling so hard that the structural integrity of your body is compromised and you become a puddle of goo. Which, I should add, is preferable to listening to Made In Japan.

Side B is the studio stuff! On Alive II, possibly the best album KISS ever put out, you've got a very solid studio side - 'All American Man' (despite being unintentionally funny, it's a corker), 'Rockin' in the USA' and the splendid Space Ace fronted number 'Rocket Ride'. Good Bye doesn't quite scrape the firmament in the same way, alas. More production line hard rock with 'Before You Descend', which then gives way to a genuinely nice moment called 'Out To The Sea', sporting a fairly grand arrangement underscored by swelling Hammond organ surges.

The next track is the one that set me off, though - Flied Egg totally bin off all the rawk for a bizarre interlude called 'Goodbye My Friends', which feels like nothing more than a prank. Played on what might be a clavinet or electric harpsichord, it's like someone decided that what Good Bye really needed was a tribute to Engelbert Humperdinck or Tony Orlando and Dawn. Chintzy, schmaltzy, out of tune, it comes across like a Sacha Baron Cohen bit being played out for some hicktown unsuspecting rubes, but I think it's entirely done in earnest. It's altogether quite charming as a consequence.

Of course, Good Bye doesn't actually sign off with the 'so long, adieu!' ditty, because this ain't the summer of love, pal, so instead we're left with the '521 Seconds Schizophrenic Symphony' to remember Flied Egg by. It's divided into four movements, just like the most tedious Kansas tracks (or entire Gryphon albums), which each have their own flavour, I suppose. There's a quiet bit (nice acoustic guitar work, I concede), the bit with some cod-Bach organ work and a predictably pompous, bathetic conclusion, fizzy with the crash of cymbals and, called the 'Finale'. If you've ever seen the likes of Mountain work themselves up into a froth, you know exactly what this sounds like.

What else can I say? Flied Egg sound like they're going to be fun, but they're not. There's one good track on Good Bye ('Out To The Sea') and one very, very bad track influenced equally by Eurovision and your local supermarket's cheese aisle ('Goodbye My Friends'), and that's it. Don't buy this album, I won't enrich your life in any way. There's nothing more that needs saying, really. Good bye.