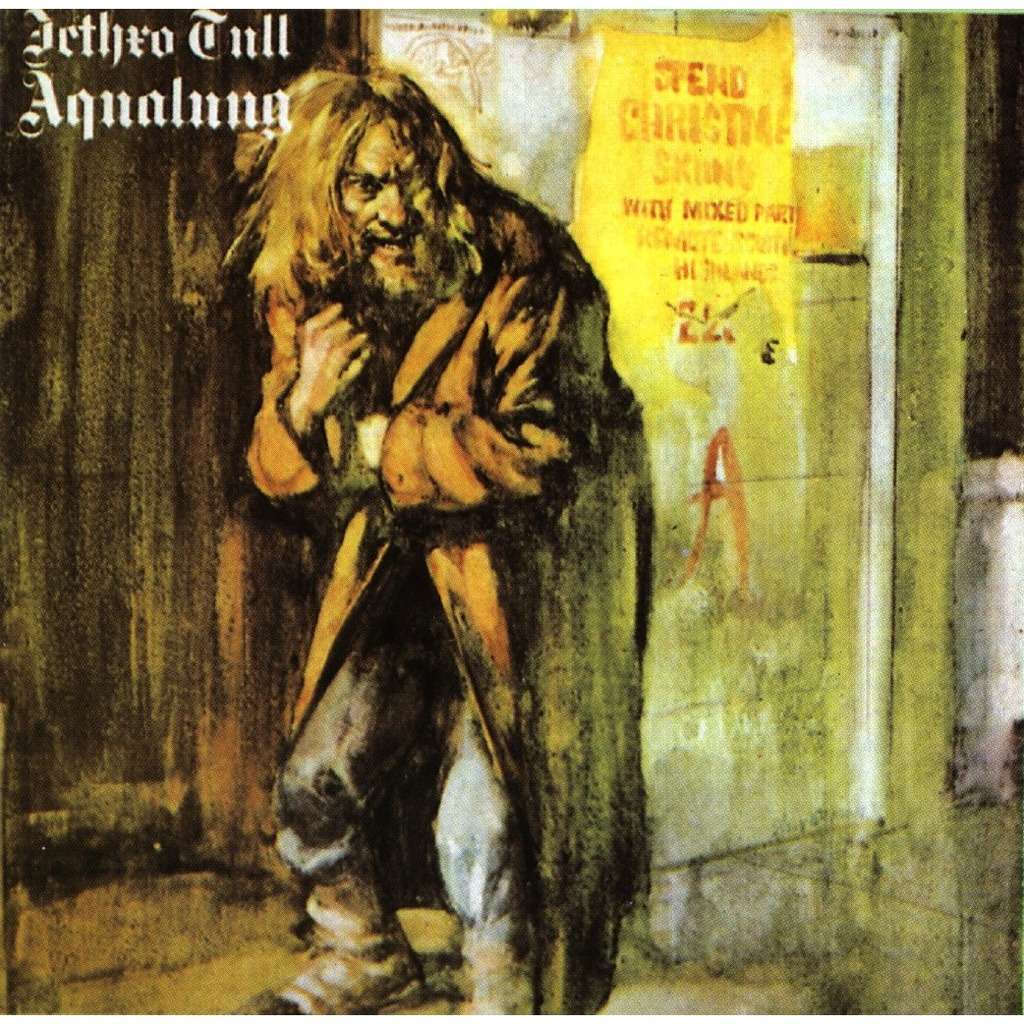 Provenance: I guess at one time I decided that should get into Jethro Tull. Anyway, I purchased this album before I went to university because it formed part of the meagre collection of burnt CD-Rs that accompanied me to halls of residence. I blasted the shit out of this thing during my first year.

Review: Some artists or albums are hardy perennials - they can be played almost any time of year and slot right in. For some reason, Jethro Tull are a seasonal band; I couldn't imagine spinning Heavy Horses or Songs From the Wood whilst the sun is shining. Very particularly, Aqualung is a winter album. Perhaps it's due to to the imagery of the title track, with its ice and 'December's foggy freeze'. It may be due to the seam of religion that runs throughout, which for some reason I've long associated with a dank coldness (the interiors of churches and cathedrals, perhaps?).

Or it might be that Aqualung goes well with the most deathly season because it sounds pretty goddamn deceased itself. I've got plenty of albums from eras where recording technology was still quite rudimentary, others whereby some creative studio trickery dates the music badly. I've even got a couple made by a sex offender in his basement. Whatever their flaws, none of them sound as dead as Aqualung. There are grime tracks recorded on mobile phones with more presence. The cardboard guitar in the video to Judas Priest's 'Breaking the Law' has better tonality than Martin Barre achieves. There are uncontacted tribes deep within the Amazon who have opinions about the production on Aqualung.

I've got more beef with Aqualung. About the only moment of human warmth and empathy on the entire collection comes early on, in the acoustic mid-section of 'Aqualung', where we are invited to feel sorry for the subject of the track, the titular tramp. For the rest of the album, Ian Anderson's lyrics are by turns arch and sneering, as if he's just that wee bit more clever than the listener. It's particularly insufferable on 'My God' and 'Hymn 43', which come across as 1971's equivalent of watching a YouTube atheist channel. (NB - please don't watch any atheist-themed YouTube content - it almost drove me, a staunch non-believer, to the seminary.)

Take, for example, Sparks - a band who are undoubtedly arch and oh-so-smart, but who wear their erudition lightly, and deploy a winking charm to make their references to Shakespeare, the Rockefellers and the human reproduction cycle slide down easily. Jethro Tull, alas, come across as dour as any carping Presbyter or dorm-room Maoist in their attempts to enlighten.

It's a shame, because putting aside the hectoring and shit production, Aqualung possesses the kernel of a prog classic. The electric guitar riff to 'Aqualung' is a blooter, and is rightly smashed out by greenhorns in guitar shops up and down the country. 'Cross-Eyed Mary' has some wonderfully angular guitar work, and is probably the leanest, dirtiest thing on the platter. 'Locomotive Breath' is another corker, an indomitable chugger that is nevertheless not as heavy as the version that plays in my head. It also sounds like a rubber band is part of the instrumentation. Ah, fuck it, 'Locomotive Breath' properly smokes.

Even 'Hymn 43' doesn't sound so bad, if you ignore the lyrics. In fact, it would have fit in very nicely on Atomic Rooster's Death Walks Behind You, an album that I like very much.  Pick of the bunch for me is 'Mother Goose', not only for its delightfully absurd lyrics, but because it best resembles the twisted folk that would appear on my favourite Tull joint, Songs From the Wood. Hey, maybe I'm being tough on Aqualung because it's not Songs From the Wood! Maybe!

Look, I can take the sermonising if the music sounded immaculate, and it doesn't. I still like this weird, somewhat cerebral little beast but it could certainly do with someone like Steve Wilson to give this a bit of remastering spit and polish. Oh, and I was wrong earlier on - contrary to my claims that Aqualung was altogether bloodless, 'Wond'ring Aloud' possesses a lot of heart. It's rather beautiful, in fact.

NB - my CD version of Aqualung contains a rather interesting interview with Ian Anderson about Aqualung. In the interests of fairness, it's not just me who thinks the album doesn't quite sound right; Anderson uses a portion of the conversation to bemoan the production, and the difficulties of getting decent performances on tape in the particular studio Jethro Tull were assigned.
Posted by AC at 10:33