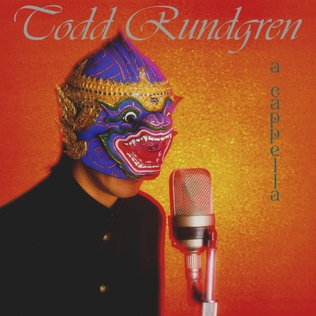 Provenance: My brother bought this for me as part of a three-album set of Todd Rundgren's Warner Brothers releases.

Having dwelt a fair bit on some pretty straightforward classic rock releases, I asked my brother what I should review next. His suggestion was A Capella, which certainly fits the bill of being a wee bit left-field, because...

Review: ...every sound on this album was created using Todd Rundgren's own voice. It's not entirely free of instrumentation - the liner notes of this release note the use of the Emulator sampling keyboard, which was deployed to manipulate those sounds into chords or percussive noises. On the other hand, this was put together back in 1984 and used entirely analogue recording techniques.

Of course, a capella performances are nothing new. The phrase 'capella' derives from the Italian 'chapel', and so the root of unaccompanied singing in western tradition is linked to sacred choral performance. This gives me a good excuse to embed the following video, which I regard as rather remarkable:

In African-American traditions there is, of course, gospel; its own overt religiousness hardly proving a barrier to becoming popular, both in the past and epitomised by modern ensembles such as Sweet Honey in the Rock. (NB - for a provocative take on the origins of gospel, jazz musician and academic Willie Ruff has got you covered, claiming that its roots can be found in Hebridean line-singing.)

Cutting across ethnic lines, although again beginning in African-American communities, the doo-wop explosion of the middle of the 20th century began with corner singing, though instrumentation was often added in the studio. Typically, doo-wop groups would feature a lead tenor taking the melody, a bass voice to provide rhythmic underpinning, and a combination of high tenor leading down to baritone to fill out the backing sound, going 'top to bottom' in range. Hit up groups such as the Orioles, the Moonglows and early Drifters if you want a taste. I haven't even gotten onto barbershop quartets, floor singing in folk music, field hollers, or non-Anglo ensembles such as Ladysmith Black Mambazo - but the world of vocal performance is rich and varied.

However, what Todd Rundgren has done here feels almost ridiculous. My first reaction, when my brother told me about the concept behind A Capella, was "why go to all the bother?". Especially if you're going to mash and twist your vocals through a series of electronics just to produce the desired effect. On reflection, I have an inkling that it was precisely this ability to manipulate sound in such a way that appealed to Rundgren; that, and the sheer challenge of creating such a weird album. For someone who has genre-hopped his entire career, it does seem of a piece.

The best thing about A Capella is how damn fun it is. Opener 'Blue Orpheus' is absolutely stunning; the audacity to produce something that sounds so startlingly odd still has me laughing every time I hit play. I can't easily describe it; perhaps like a cut from Yes' 90125 album, if Trevor Horn made the band ditch their instruments. It's all the more remarkable that it has such a strong melodic sense, the lead vocal soaring over a backing more multi-layered than anything Queen or 10cc ever managed to conjure up.

Indeed, even after repeated listens, the sounds leaping from the speakers can still surprise; the chorus to anti-war paean 'Johnny Jingo', on its last pass, is overwhelming in its immensity. The effect is dimmed a little on the ballad 'Pretending to Care' and the only cover in the collection, if only because it's are the kind of song one can imagine performed on piano in a nightclub or cocktail lounge; low-key, and only a slight shuffle away from being sung unaccompanied. Nonetheless, the curtain of wordless 'oohs' and 'aahs' Rundgren stitches together to recreate what might've been a lush string arrangement is killer.

My personal favourite on A Capella is 'Hodja', a dizzying admixture of doo-wop and gospel, its meticulous creation shot through with a lively sense of spontaneity thanks to some delightful scat singing. Some of the joints on this piece are pretty tough to categorise - 'Lost Horizon' is Sensual World era Kate Bush meeting So's Peter Gabriel crossed with the shiny white soul romanticism of Hall & Oates. Meanwhile, 'Something To Fall Back On' sounds like one of Kenny Loggins' dancier numbers, if he had the Bee Gees backing him up. I'm at a complete loss as to how Rundgren was able to recreate the organ on this track, given the technical limitations he was dealing with at the time (though, of course, actually at the time, Rundgren probably found the Emulator to be an incredible, labour-saving piece of kit).

As each track unrolls, one can't help but be awed at Rundgren's facility and expertise, even if the song doesn't quite strike home. I'm not overly keen on either the Bloody Mary fable 'Lockjaw' or 'Miracle in the Bazaar' and its cod-Orientalism but these are rare moments of filler, and in fairness 'Lockjaw' did sound like fun to put together (but - if it was just a few notches less goofy it could easily have been a cut from a late-era Tom Waits cut). 'Honest Work' is a touching and poignant folk ballad, that's the 'straightest' thing on A Capella and I can't figure out whether it would benefit from a more maximalist approach or whether it would ruin the sentiment. The confection ends on a high, the bouncy, joyous 'Mighty Love' (originally by the Detroit Spinners, the only cover here) taking us home with gospel-inflected soul power.

What a peculiar artefact A Capella is. It certainly stands out as unique in my collection, if only because nobody else that I rate would be bonkers enough to put in the Stakhanovite effort. In any other hands this would be 'experimental' (=unlistenable) but Rundgren has too keen a pop ear to fall into that trap. A dazzling, baffling testament to a singular and restless genius, I can't recommend A Capella enough.
Posted by AC at 08:08