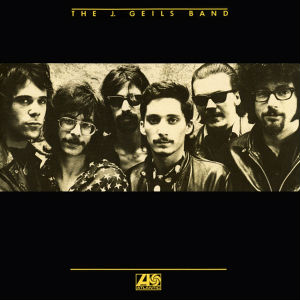 Provenance: During Sixth Form I formed a group, to play at our school band bash, called Centerfold. The ostensible reason for doing so was to play stuff that wasn't punk or metal (the two flavours of music available at the band bash), but really it was so I could play the J Geils Band song 'Centerfold' to a large-ish audience.

In that respect it was a success, but in most others the performance was not just an abject failure, but a litany of failures. Nevertheless, today I am able to battle through the still-present fug of embarrassment to get back on the J Geils Band horse. Here's their first album, and won't you just look at these cool rockin' daddies - hotcha! Hotcha!

Review: Basically, I became mildly obsessed by the song 'Centerfold' after hearing it at a pub quiz. Not long after this revelation, I learned that the band once invited Lester Bangs onstage to play a typewriter solo. A band worth following up with, you'd think - and I duly did, a mere sixteen years later. Other stuff got in the way I guess. Anyway, I had come to be aware of the fact that early on, the J Geils Band were more a gritty R&B band than the slightly New Wavey 'Centerfold' would suggest. That's fine, as my tastes certainly skew towards gritty R&B, plus they had a harmonica player called Magic Dick, which frankly ticks a lot of boxes.

I'm partial to a spot of roughhouse blooz 'n' roll, and that's essentially what this is. Somewhere west of Dr Feelgood and north of Albert King circa his Born Under a Bad Sign Stax release, it's unpretentious, knockabout fun with not a little craft. I like the fact that vocalist Peter Wolf doesn't confuse histrionics with expression, and I'm delighted by Magic Dick's fluid, buzzy interpolations. He even gets his own showcase of his own called 'Ice Breaker', which has hints of Booker T & the MGs. It's a bit odd to sequence this in at track two, though. Was Magic Dick their big selling point? He certainly blows a good harp.

Despite J Geils Band scoring precisely nul points in the originality stakes, it's testament to the band's facility with a twelve-bar that their original compositions stack up well to their interpretations of others. The gear-jamming anthem 'Hard Drivin' Man' (gotta drop that 'g', baby) is the highlight of side one, and has a suitably top-down, open-highway feel to it. It is, however, run quite close by the crawlin' king snake strut of 'Serves You Right to Suffer', and it's nice to hear John Lee Hooker done well in a band setting. Part of JLH's charm was his looseness, which was often the first thing that bands covering his songs would discard. It's great to hear the J Geils Band have the confidence in the material to stretch out and keep proceedings simmering away at the right temperature.

However, having praised the songcraft evidently in existence within the J Geils Band, the true standout of the whole album is the cut that gets side two cooking. I already loved the Otis Rush original of 'Homework', but this hard-charging, snakey version is solid gold. To follow it up with a bippin' and boppin' version of 'First I Look at the Purse' (a hit in 1965 for The Contours) is pure filth. The start of side two of J Geils Band can go toe-to-toe with anything. Likewise, when you decide to round off proceedings with the Albert Collins instrumental cut 'Sno-Cone' (according to the liner notes here, co-written with The Big Bopper - helloooooo baaaaaaby!) you could've packed the intervening ten minutes like a sock of shit and I'll still be giving this disc a rave. Okay, so 'On Borrowed Time' might not be the greatest blue-light ballad ever written, but it's a welcome change of pace. I love everything else.

As I mentioned before, there is nothing new under the sun here, but when it's this muscular, unpretentious and tightly arranged (all words that can describe me, incidentally) there's nothing to do other than sit back and admire a job well done. The J Geils Band might sound like a bar band, but it's the best damn bar band west of the Danube. Buy this album.
Posted by AC at 08:41