A Boy From Tupelo - Elvis Presley 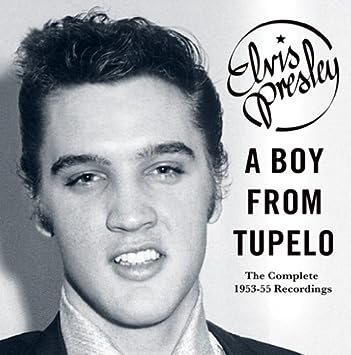 Provenance: I've been to Graceland, you know. It's the roughly seven-year anniversary of the road trip I took around the Deep South of the USA, during which I met the person who I would later go on to marry.

That journey proved to be the catalyst for me to fall in love with a whole bunch of things, aside from another human being. There's New Orleans, and fried catfish, zydeco and the Great Smoky Mountains, the Arkansas State Fair and Twelve Bones BBQ, small town hospitality and the alluvial expanse of Mississippi's Delta Region. I know, I've reeled off a bunch of cliches - and I stand by them all. For a dumb, wide-eyed young'un from Bournemouth, it was something the hell else.

Rather unexpectedly, I also found myself falling in love with a certain Elvis Aaron Presley. I'm driving down the highway in my rental, destination Memphis. I want to be the biggest tourist around, see Beale Street and the Stax Museum and, of course, take a pipe at Graceland. I've got a passenger with me, a large raw-boned chap called Tommy, a former Aussie Rules player I picked up in Nashville. He's here on business, but taking some time out to travel a bit. About twenty miles out of Memphis and fiddling with the satellite radio I get an Elvis station - live from Graceland - on Sirius XM. (Closer into town and I'm on the newly-christened Isaac Hayes Boulevard, which is nice because it wasn't named after a racist.) W head south toward the airport, hang a right and we're almost there.

Graceland isn't a place for the fainthearted. It's a monument to both a great artist and to folly. It is excessive, tacky, a glittery testimony of all that is crass. To stumble around this bejewelled carbuncle is almost nausea-inducing, and one has to consciously remind oneself that actual human beings dwelt in this funfair house of mirrors. And you think, yes, the star of such cinematic triumphs as Clambake and It Happened at the World's Fair would live in such a place. Yet on the ride in, you heard something pulsing on the radio, something vital...

We got into Graceland fairly late, and as Tommy and I were leaving we noticed trestle tables being set up and barbecues being lit. So we decided to do what any two folk in our position would do - don our suits (don't ask why I packed one, but a great call), hustled our way into the function and spent the evening partying on the verandah, food and drink courtesy of the Tennessee Department of Tourism. We even witnessed what must've been the most high-pressure gig for an Elvis impersonator to perform. Yet even in that pale imitation, there's a whisper of something great...

Review: This handsome three-CD (and book) box-set contains every recording of Elvis spanning the period 1953-55, including service acetates, radio performances, studio takes and singles. I'm only reviewing disc one, containing the acetates, the RCA masters and those immortal Sun masters that cemented Elvis' early reputation.

Nick Tosches is a man who can spin a yarn, the kind of guy whom I imagine considers the gospel truth to be a minor inconvenience when there's a good story to be told. His biography of Jerry Lee Lewis, Hellfire, might be based in part on speculation and hearsay but it's also scintillating. Similarly, there's some tall tales told in Country: the Twisted Roots of Rock 'n' Roll but amidst the mythologising there's some important history on the genealogy of American country music (spoiler: it's all British, and often very old). The book also takes a stand for white hillbilly music's influence in the formation of rock 'n' roll; if not a wholly equal partner with black rhythm 'n' blues, Tosches nevertheless states a strong case - citing plenty of evidence - to suggest that a) there's a clear and obvious country ancestry to rock 'n' roll that's deeper than white performers appropriating black musical forms and b) that blues and country music were cross-pollinating each other for decades anyway. All this is worth holding in mind with regards to A Boy From Tupelo.

From the collection of early acetates you can hear why Sam Phillips initially didn't think he had much on his hands. In a restrained, slightly quavery voice Elvis sings a few torch songs accompanied by his own rudimentary guitar playing. Nothing here for Tosches, or anybody else, to write home about. Even the first couple of Sun masters are on the soporific side. And then, all of a sudden - magic, pure magic, as rockabilly bursts forth from the speakers in full colour. Elvis, along with guitarist Scotty Moore and stand-up bass player Bill Black, tear into Arthur 'Big Boy' Crudup's 'That's All Right' with a wild assurance. Gone is the thin reticence that defines Elvis' sophomore efforts; instead, he meets the percussive thump of Black's bass with a swaggering, swooning brilliance. If ever a recording sounded white hot it's this bad boy, people, it's this one.

There's so, so much more to come; Bill Monroe's waltz 'Blue Moon of Kentucky' whipped up into a 4/4 country-blues; the supreme cover of Roy Brown's jump blues 'Good Rockin' Tonight'; a crackling 'I Don't Care if the Sun Don't Shine'; and possibly Elvis' most potent two and a half minutes ever committed to wax, his cover of Junior Parker's 'Mystery Train' (Scotty Moore is sublime on this cut). Even here, in this formative (and utterly electric) period, Tosches was able to muster up a moue of disappointment; he pinpoints the false start of 'Milkcow Blues Boogie' ("hold it fellas, that don't move me - let's get real, real gone for a change") as the moment Elvis first demonstrates his own awareness as a commercial performer, effecting a compromise that would forever taint the rest of his artistry. Well, it's an interpretation, and from a man who certainly knows his onions.

Given the technological and stylistic(?) advances(?) that have been made since Elvis started stirring things up in a small room in Memphis it can, at times, be hard to see past this compilation as a collection of historical curios. Certainly, for ears attuned to popular music created a bit later - say, from The Beatles onwards - it can sound a bit primitive. I recall a conversation with a friend where he spoke approvingly of rockabilly revivalist fashion but said he couldn't fully dig the whole package because of the limited sonic palette the music drew from. I grok. I'd flip that around and say that Elvis, and a whole bunch of contemporaries (and near contemporaries) coupled simple music to simple instrumentation and created some of the most exciting and life-affirming music of the last century. Sinuous, dangerous, slinky, sexy, sweaty, belligerent and beguiling - that first flush of rock 'n' roll was where it was at, folks. Let's get real, real gone, for a change.
Posted by AC at 15:59