Under The Savage Sky - Barrence Whitfield & The Savages 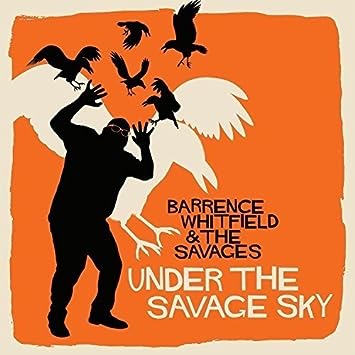 Provenance: I heard a track from this album, 'The Claw', on a sampler CD from Classic Rock magazine. It really stood out from the crowd, and I'd never heard of Barrence Whitfield nor his troupe of Savages, so decided to take a punt. I am well aware of the 'one good song on an otherwise shit album' issue, and indeed, have fallen victim to that particular pitfall myself before now.

Review: Wow, this is a lot of fun! A no-frills garage rock band fronted by a soulful blues shouter, packing twelve songs into 35 minutes, ensuring nothing outstays its welcome.

Bostonian Barrence Whitfield (real name: Barry White) is now in his 60s but you would've thought that a record this lusty and vital was made by someone half his age. Make no mistake though - this ain't snotty kid music, as is clear from 'I'm A Full Grown Man', which carries on the ripe tradition of grown-ass braggadocio pioneered by the likes of Muddy Waters and Bo Diddley. This is tough, muscular R&B with a punk edge, delivered with the same kind of assuredness and command exhibited by the great soul stirrers of yore.

I don't know about you, but I'm a sucker for that diamond-edged guitar sound and a skronkin' ol Bobby Keys saxophone. It's there on 'Rock 'N' Roll Baby' too, sounding every bit as joyful and demented as the sax on 'Blue Moon'. (The saxophone is the most maligned instrument in rock music - I think I've said it before, but I'll say it until I'm as blue in the face as the aforementioned titular astronomical body; used rightly, whether slinking away sinuously in Steely Dan's 'Doctor Wu' or covering the first row in spit, as in Frankie Lymon and the Teenager's 'Why Do Fools Fall In Love?', it's devastating.)

I'm going to make a criticism, and then proceed to dismiss my own qualm immediately. The criticism? Under The Savage Sky feels as familiar as Arsenal labouring against a team in the bottom three. The dismissal? Who gives a fuck when it's this fun? 'The Wolf Pack' is, as one can deduce before even hearing a solitary note, a tribute to Howlin' Wolf, which in theory could be terrible. However, when the rollicking Hubert Sumlin riff (doubled on saxophone) is met by Whitfield's dead ringer Chester Burnett yodel, it's impossible not to crack a grin.

That's the deal with this unholy collection; every time you detect a hint of The Hives, or a soupçon of Wilson Pickett - perhaps a seasoning of The Seeds, or a suggestion of Sam & Dave - it's like a reward for digging all this sweet ass music, mingled with the reassurance that someone else is still out there, sweating and hollering and keeping the flame alive. About the only time that this magpie attitude towards appropriation oversteps the mark, I think, is on 'Angry Hands', which has a guitar motif that is a near identical twin to that on Alice Cooper's 'I'm Eighteen'.

There's not much left to say. If you like catchy, rough-edged R&B, Under The Savage Sky is the bad boy for you. I haven't investigated any further back just yet (this album came out in 2015) but I get the impression that I won't be disappointed. By the same token, I bet these guys absolutely bring it in a live setting. You can almost see the steam coming off this platter and it's a studio cut, good grief. Just imagine. Just imagine.

(Oh yeah, I've got one quibble with that Diffuser list I linked to in my first paragraph: Len's 'Steal My Sunshine' always was, and ever shall be, an unmitigated pile of crap.)
Posted by AC at 14:00