We Are KING - KING 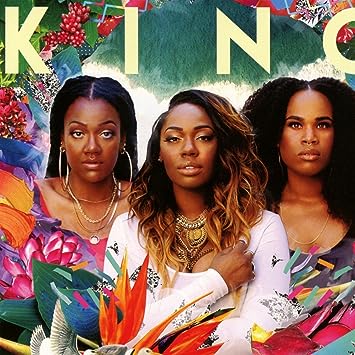 Provenance: You wouldn't guess it to look at me, but when my body isn't being held together by gaffer tape I sometimes go to the gym. Anyway, I heard 'The Greatest' whilst getting ripped and felt compelled to explore further.

Review: Were I to indulge in a conversation with the sixteen-year-old version of myself he'd be incredulous to hear that I consider We Are KING to be the album of the year (so far). Here are a few problems:

I was, of course, a rock obsessed idiot back then, but fifteen years later We Are KING is an anomaly in my music collection. It's fair to say that the music I own is overwhelmingly white, male and guitar oriented. My saving grace is that I've become a smidgen more catholic in my tastes and a bit less ideological, inasmuch as I used to write off entire genres due to a lack of 'authenticity' (a concept that mostly stemmed from a perceived ability to play traditional rock band instrumentation).

Thank fuck I grew up and opened my ears a little, as We Are KING is a dreamy joy from beginning to end. Let's start with the single from the album that sucked me in, 'The Greatest', which sounds like a glorious throwback, like TLC's best slow-jam with an 8-bit filigree. It's woozy, weird, affirming and, with its nods to the late Muhammad Ali, poignant.

It also sets the tone for the rest of the album. Very rarely does We Are KING stretch its legs beyond a languid amble; 'Supernatural' is the only track that threatens to break into a sweat but settles into a gentle shuffle. The production matches the pace; liquid, warm and ambient. Regarding the vocals, comparisons with 1990s R&B are inescapable, diva virtuosity largely eschewed in favour of hushed, sensual intimacy. When all the voices are combined and recombined, the effect is not unlike the multi-layered and heavily treated vocals on an Enya album.

Throughout the mood is kept sweet and dreamy - 'Red Eye' exists in the same zone of peculiar half-somnolence one might experience on an transatlantic flight; the outro to 'Hey' dims the instrumentation down to a kind of background radiation, allowing the listener to lie back on a cushion of noise created by the group's whispered singing.

KING are Paris Strother, sister Amber Strother and friend Anita Bias. Paris must be considered the leader here; as well as singing, she plays and produces almost every sound on the disc, collaborated on designing the artwork and also owns a share of the publishing through her own company. We Are KING is totally the baby of a distinctive genius; many of the keyboard and synthesizer sounds Strother employs would sound at home on a 702 or Jade release but the end result comes across more like a knowing wink to that era rather than straight imitation.

It's nice to be blindsided by something that I wouldn't normally give a second thought to. My semi-frequent visits to the gym have yet to yield another doozy (and I might do something I'll later regret if I have Fleur East one more time) but it has reminded me that I shouldn't cocoon myself away in my headphones listening to hoary old favourites like Led Zeppelin and Judas Priest. Next review on Swinetunes: Judas Priest.
Posted by AC at 06:50