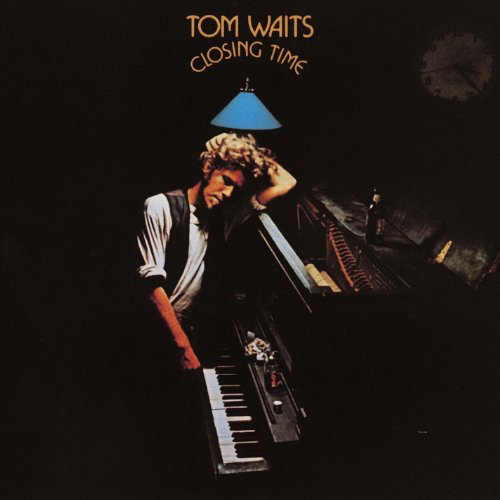 Provenance: For my 29th birthday my partner bought me ten Tom Waits albums because I'm a cool guy with a great taste in music. Incidentally, my partner is reasonably hip too - certainly a better writer than I could ever hope to be.

Review: I'm actually starting at the start for once - this is Tom Waits' first album. Believe me, this'll be one of the few times where I don't play compact disc Jenga with my structurally unsound stacks of plastic.

Ten albums by an artist I had rarely, if ever, mentioned was quite a gamble. Hitherto, my partner's engagement with my music collection consisted of parodying the singing styles of Neil Young, Bon Scott and Brian Johnson. Getting married to me, it could be argued, was also a rash and poorly-evidenced decision so perhaps it's congenital.

What I did know of Tom Waits was that he was responsible some fairly experimental music (and one or two notable press conferences) so I was fully prepared for a journey to these weird hinterlands occupied by Captain Beefheart and Scott Walker. What I didn't expect was a slice of shaggy-dog Americana that evoked shades of Jimmy Webb, Nils Lofgren, the Eagles, Randy Newman and the aforementioned Neil Young. Formally, there's little to hint that this artist will one day produce Mule Variations or Swordfishtrombones; and at times, the music ploughs a very comfortable furrow down the middle of the road. I am, however, only telling half the story.

As it so happens, the lead-off track 'Ol' 55' would go on to be covered by the Eagles. It sounds like a goddamn Eagles song, aside from Waits' heavy-lidded drawl. The hiccup-bellow of later releases fails to make an appearance, even in embryonic form. What buoys this album is the twin brilliance of songwriting and sequencing. In just twelve short tracks Waits creates an entire universe of melancholy and longing. Even when Waits puts the wistfulness aside for a (brief) moment his music never quite escapes being anything more than bittersweet. In a psalter of hymns for the losers optimism is something that can only be fleetingly glimpsed.

In that sense Waits occupies the same territory as Newman, most obviously on 'Lonely'. However, where Newman often creates moments of wry levity to make his sometimes desperately sad songs a little more digestible, the best that Waits manages is the tired half-smile of a man down to his last nickel. This is not to his detriment; a chuckle on this album would be as incongruous and unwelcome as a fish head sticking out of a birthday cake.

The best thing on here by a country mile is 'Virginia Avenue', the album's jazziest number, a slow-rolling piano sharing space with lugubrious string bass and muted trumpet. You're out of the coffee house and into the dive bar, your nostrils filled with stale cigar smoke, your stomach burning with gut-rot whiskey. Personally, the primo stuff that Closing Time has to offer occurs when Waits packs his acoustic guitar away and gets behind the piano - 'Midnight Lullaby', 'Grapefruit Moon' and the title track standing out in particular.

As I type these words the final chords of Closing Time are melting away. From my window I see a cuticle of moon hanging above a silent town and a sea dark as pitch. It is one of those moments where senses combine to create an atmosphere that is positively filmic, like it's spilled off the reel of a classic noir. A touch of fog and a glass of bourbon (as opposed to Diet Pepsi) and it'd be somewhere close to perfect.
Posted by AC at 14:03