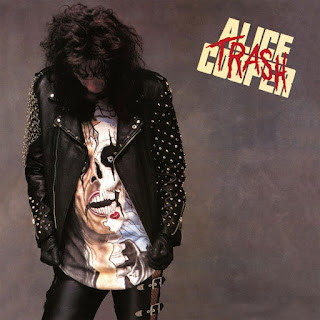 Provenance: By the time I bought Trash I was already a big Alice fan. I was deep in the Cooperverse.

I will say this, though - I vividly recall hearing the song 'Trash' for the first time at my friend Chris' house. It was Chris who pointed out that Jon Bon Jovi provided backing vocals, and delivers the immortal line "If my love was like a lollipop, would you lick it?", presumably to Coop, on the bantering outro.

Review: There's a time and place to revel in sumptuary; likewise there exists occasion to ponder the sublime. And then, there are those instances in life where all you want to do is yell along to "And when you hit the sheets you just turn to - trrrrraaasssshh!".

In many ways, this imperative sums up much of the appeal of Trash. The verses to each song range from the catchy to the workaday, but essentially act as a series of previews to some absolutely huge choruses. That's what Trash is - an album of massive choruses. There are ten songs here, and I can sing you eight of the choruses, easily, and could do so before giving this its most recent spin.

The act of listening again has really driven home this point - Trash is one of the lesser-played Cooper albums in my collection, and I reckon I haven't listened to it straight through for maybe three years, at least. So, the first twenty to forty seconds of every song bamboozle me, and then the chorus hits and I go "ah! It's this one!". Rinse and repeat nine times; if nothing else, Trash has been a gentle ride featuring a succession of miniature surprises.

Now, I say this process happened nine times, because there's no mistaking opener 'Poison', a song so ubiquitous that even non-rock fans have a fighting chance of knowing it. I certainly heard 'Poison' pumped out more than once at Student Union nights. It has an instantly identifiable riff, but - whisper it - I find it a little pedestrian. Without totting up the figures I believe I've seen Alice Cooper more than any other live act, and common to all these gigs is my impression that the band drag the tempo of 'Poison' somewhat. But upon review, nope, it really is this plodding. But - crucially - it does have a big dumb chorus!

As, indeed, do the next three tracks - 'Spark In the Dark' (maybe my favourite?), the poppy 'House of Fire' and the bratty 'Why Trust You' - as decent a sequence in the mature (a term I use advisedly where hard rock is concerned) Cooper oeuvre as you'll find. However, because this is hair metal era Alice we have two ballads, 'Only My Heart Talkin'' (featuring Aerosmith's Steven Tyler doing that weird 'bum-de-duppa-do-way' scat that I can't unhear) and 'Hell Is Living Without You'. I suppose you needed a cigarette lighter moment or two, despite the air being freighted with Aquanet hairspray, and these are...serviceable, I suppose. By the books, you could say.

Probably the biggest shame is that Trash cleaves so closely to hair metal tropes, including the key change emotional bump (key changes that present-day Alice probably regrets now, given his limited vocal prowess) and squealy guitar soloing. Probably the biggest disappointment are the lyrics. If Last Temptation is his grunge-light, Mephistophelean Christian rock record (and a very good one too) and Brutal Planet is his belated stab at high-alienation nu-metal (also pretty good), then Trash is his "I'm a good sex man" album. The late 1980s was rotten with bedroom braggadocio, replete with fire/desire rhyme schemes and almost threatening promises about what's gunna go down when the bedroom door closes. No exception here.

At least he doesn't quite reach the nadir of 'Feed My Frankenstein', which is on successor album Hey Stoopid, which is a great song thoroughly in spite of its clunky single-entendre lyric sheet. I only highlight this because, once upon a time, Alice Cooper was such a good and strange writer; think of the ground covered on Killer, Billion Dollar Babies or, hell, the first Alice Cooper solo (as opposed to the band) record Welcome To My Nightmare. Cooper is credited on every song - but then again, bar 'Only My Heart Talkin'', is Desmond Child. Now, Child's facility with writing slick, radio-friendly hits is unquestionable - his estimable track record speaks for itself - but by being able to bottle that rock 'n' roll everyman appeal, he smooths away the interesting, quirky aspects of the performer's art. Perfect for Bon Jovi and Ricky Martin, with whom he's had huge success, but his contributions dilute the essence of artists like Alice Cooper. Saying that, what did Cooper have in the tank at this stage? 'Poison' signalled a career resurrection of a kind for Cooper, after all.

In summation, then; if you're after the wild and woolly Alice Cooper of the Alice Cooper Band days, you're not going to find it here. Not a jot. Outside of muttered sexual imprecations you're barely able to detect the shock-rocker Coop who scared a bunch of Top of the Pops-viewing grannies in the 1970s. What you will find is well-executed, punchy and extremely catchy hair metal, and I will say, probably at the top end of the hair metal spectrum in terms of quality. It's lightweight fun, but so what? Dump your brain for forty minutes and rock out, my dude.