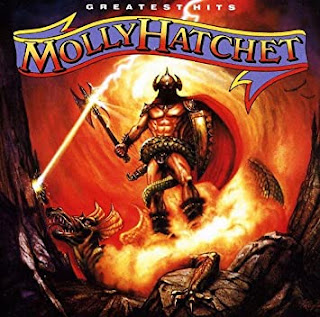 Provenance: Does anyone recall that you could message people you were torrenting from in Napster? Some guy in the USA was downloading an Alice Cooper track from my account (this was around the turn of the twenty-first century, kids), and asked me what else I listened to.

Being a mere stripling I didn't have a huge amount to say, but on the basis of my tastes he recommended three acts to me; Ted Nugent, Bob Seger and Molly Hatchet. I downloaded tracks from all three - 'Free For All', 'Old Time Rock 'N' Roll' and 'Flirtin' With Disaster' (a process that took about two days).

The Molly Hatchet track, with its twisty turnarounds and twin-lead breaks, was the standout. Evidently I couldn't shut up about 'em, because my girlfriend at the time bought me this - Molly Hatchet's Greatest Hits - for Christmas!

Review: Molly Hatchet, what a band.

I went to see a version of them with one original member (very good, by the way). They still tour today with zero original members. They have a mortality rate higher than Hot Shots: Part Deux, the Hatchet lead singer position akin to that of the drum stool in Spinal Tap. The Frank Frazetta album covers promise blood-soaked heavy metal, but what you get is southern-fried boogie. Bobby Ingram has two haircuts.

Yet, and yet, and yet - on the evidence of Greatest Hits, Molly Hatchet absolutely smoke ass. They're a southern rock band alright, lyrics replete with tall tales of desperadoes, whiskey drinkers and bush-dwellin 'gators - but a pretty heavy one, leaning more towards the Blackfoot end of the spectrum than, say, Lynyrd Skynyrd. (On the basis of their first three albums alone, Skynyrd should be considered one of the great classic rock acts, full stop. Up there with Led Zeppelin and Black Sabbath. I'm being serious.) The riffs are bluesy but beefed-up, solos are flashy and trim, and selling all this is a whole load of cornpone aggrandisement about southron life.

There are two covers here, the first being a pretty good version of the Allman Brothers' 'Dreams I'll Never See'. I may even prefer it to the rather churchy original. The other is a  superb live version of cowboy saga 'Edge of Sundown', which was originally a Danny Joe Brown Band number (DJB was the singer of Molly Hatchet, quit due to diabetes, released a solo record and rejoined two years later). Two of the four songwriters were in Molly Hatchet at one point or another, but frankly, having been in the same room as them for two hours I may have briefly been a member.

That leaves ten joints of pure Hatchetry, and they're all pretty strong. You've got songs about the wayward town floozy ('Shake the House Down'), a thinly-veiled car-as-metaphor-for-woman stomper ('Ragtop Deluxe'), a swaggering number about drinking too much ('Whiskey Man') and so forth. Without listening to a single note of music, on the basis of these song titles alone try imagining what they sound like, and I guarantee you're pretty much on the money. The only element you might not have considered is Brown's quirk of whistling the guitar solo in, like he's directing a sheepdog.

Now, 'Gator Country' is a song that has taken a few years to work its charms on me, but I now fully appreciate it. Virtually every southern rock band does a song about how cool it is to be from the south, or if not, they've recorded its related cousin, having a pop against critics. Skynyrd did it. Charlie Daniels did it. Drive By-Truckers did a whole album about it. In many ways Molly Hatchet, natives of northern Florida, outflank everyone on 'Gator Country' by picking off nearby states (and their associated musicians) and bodying them one-by-one. Nothing like a bit of internecine cattiness, eh? In fact, 'Gator Country' is almost the complete inverse of the Charlie Daniels' band earlier number 'The South's Gonna Do It', virtually namechecking every musician that Daniels saw fit to praise. (Daniels later expressed resentment that the Ku Klux Klan used 'The South's Gonna Do It' on radio commercials - that such a thing existed is, frankly, sad and bizarre.)

Speaking of southern rock tropes - ever since 'Free Bird' it feels like every southern band (bar, perhaps, ZZ Top - but are they really southern rock? Answers on a postcard...) feels the imperative to write The Big One, a lengthy song that shows off their chops. Molly Hatchet are no exception, and it comes in the form of album closer 'Fall of the Peacemakers'. A nice enough tune with a fair sentiment alright, but after forty minutes of shit-kickin' and raising hell, it feels like a slightly anaemic way to bring proceedings to an end. I just want one more whammer-jammer about some narrow-eyed dude living outside of the law, y'know?

Listen, if you like hokum about bounty hunters and bar brawls, you're gonna lap this up. If you're seeking musical complexity and refined sentiment, it ain't here, hoss. Good drivin' music. Good grillin' music. Good for any activity where an apostrophe suffices in the present continuous tense. Hellllllll yeah!!!