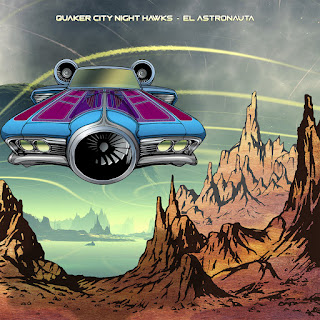 Provenance: A Christmas present from my partner! Who, in turn, heard Quaker City Night Hawks on Spotify and thought that I'd enjoy what they had to offer. Let's see...

Review: Despite providing me with one of the most underwhelming live experiences of my life, I remain staunch in my love of ZZ Top. Every era had something to sink one's teeth into, whether it was their early psychedelic rhythm 'n' blues, the world-conquering techno-boogie most people are familiar with or even their greasy latter day scuzz-rock. I am one of the faithful where the Church of ZZ Top are concerned - and so, it seems, are Quaker City Night Hawks.

Like the boys with the beards, QCNH are unabashedly Texan, with songs that tell of oil fields and goin' down Mexico way. Then there's the title of the album itself, El Astronauta, taking its cues from Tex-Mex Top nomenclature such as Tres Hombres, Deguello and Mescalero (a naming convention that was never adhered to rigidly, though Billy F Gibbons has more than once suggested that their eighth album might be reconsidered as El Iminator, the sly old dog!). But most of all, the kinship is there in the boogie, swagger and desert-fried weirdness that both bands revel in.

After some roaring numbers to start the album - 'Liberty Bell 7' being a particular favourite - things start to get a little spacey on 'Something To Burn', a slow funk jam laced with a spooky vocals and soulful electric piano. Changing pace again, 'Beat The Machine' is up-tempo acoustic rock that could almost be described as summery, reminiscent of the cruisin' good-time tracks that peppered the albums of another Texan, Edgar Winter (when he wasn't laying the smack down over gnarly riffs with his saxophone, natch).

In fact, over the course of thirty-seven minutes 'n' change, there's a nice variety within the QCNH sound - from the more stoner-influenced stuff like 'Mockingbird', 'Good Evening' and 'Medicine Man' through to the toe-tap shuffle of 'Duendes' or the atmospheric Rio Grande mindbender 'The Last Great Audit', plus the aforementioned switches in gear. Also keeping things interesting are the little filigree touches throughout, whether it's a burble of weird synth here or a glissando of prepared piano there; clearly this is a band with an expansive vision for how rock music can sound. For a moment I thought my speakers would implode at the finale of 'The Last Great Audit', which is of course very satisfying.

It's rare that I review an album on the first pass, but fortunately there's an immediacy and vibrancy to El Astronauta that gives me confidence to scribble down some thoughts. Fortunately, QCNH have produced something that I'll be spinning again and again - and maybe I'll be moved to revise my opinions in the future? Hey, this is the internet, and this is my blog, I can do what I like. For now, though, I'm more than happy with this festive treat and I'll certainly be delving deeper into the Quaker City Night Hawks catalogue.