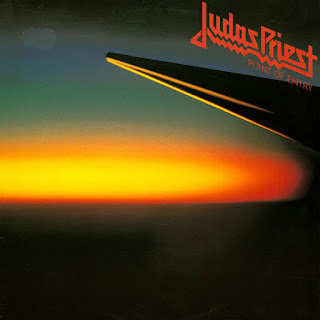 Provenance: As a dyed-in-the-wool Judas Priest fanatic I own every one of their albums (except the pair of Ripper Owens releases - no Halford, no Priest).

Review: Eh, this is a funny one.

It's as if Priest tried to analyse what made British Steel such a roaring success and alighted upon a) more commercial-sounding tunes and b) a stripped back sound as the two key components, when really the answer was always c) damn good heavy metal songwriting.

Consequently, we are presented with a sleek product with, at the time, the poppiest incarnation of Judas Priest on record - but it's all a bit lightweight. And that's coming from a guy who thinks Turbo is absolutely smashing.

There are, admittedly, a few moments where Point Of Entry does take flight. Opener 'Heading Out to the Highway' has a big anthemic feel to the chorus, married to some punchy verses; 'Hot Rockin'' is Priest doing that fascinating metal tautology better than anybody, a hard rockin' track about how hard you rock (other notable entries into this subgenre: 'Rock You Like a Hurricane' by the Scorpions, 'We Rock' by Dio); and best of all is the widescreen road movie 'Desert Plains'. This last example is majestic, expansive and frankly tickles the imagination in a way that nothing else on Point... manages to do.

Them's the three highlights. Ach, it's not as if everything else is rammel, it's just that it feels half-considered or hurriedly executed, and thus a bit frustrating. The chorus to 'Don't Go' is good in a brassy, hooky way, but why is it welded to such a faltering, unsatisfying verse? 'Solar Angels' is quite intriguing and has potential as a weird, spacey number (which, to my mind, is an approach Priest have rarely explored in their career - most of their tracks are dense, closed-fist little nasties) but the rather minimalist production lets it down. I actually like 'Turning Circles', which is almost the inverse to 'Don't Go', sporting a fantastically chunky, descending riff in the verses but an irritating chorus.

There is, alas, some stuff that is just crap. What the fuck was going on when 'Troubleshooter' and 'You Say Yes' were dreamed up? 'Troubleshooter' has a lyric that could be improved simply by ceasing to exist; meanwhile, 'You Say Yes' is simply dogshit, on a par with some of the most miserable Priest material to make it onto vinyl (what is the worst? I reckon 'Rock You All Around the World' on the aforementioned Turbo is about as rancid as it gets).

One element that puzzles me is that, in Rob Halford, you have one of the most unique weapons in metal - by which I mean his ability to sustain screams at such a pitch that it feels like a hot syringe to the ears. I suppose it was used sparingly on British Steel, and here it makes a fleeting appearances, most notably in closer 'On The Run', but c'mon fellas - this is literally one of your band's defining qualities! Fortunately, Priest would get the memo for subsequent releases, but sticking to Halford's mid-range, characterful as it is, only adds to the notion that the handbrake was on during the making of Point Of Entry.

How to sum up? A bit of a stop-gap, really. Almost anything sandwiched between British Steel and the incandescent Screaming For Vengeance is likely to appear a little pastel-coloured, but even out of context it's a bit of a weird, underpowered stab at the charts. Good news - better albums were to come, but to quote Kirstie Alley's tribute to Prof. Stephen Hawking upon his passing, "You had a good go at it...thanks for your input."