Welcome To The Pleasuredome - Frankie Goes To Hollywood 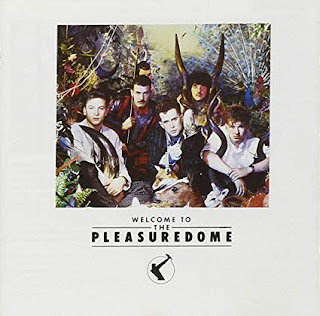 Provenance: The Burger King advert that featured 'Two Tribes' made a big impression on me. So when I saw this for a princely £2 in HMV, I considered it a low risk gamble.

Review: One of the most baffling, surreal pop experiences you can subject yourself to. Almost everyone knows the immaculate credentials of 'Relax', 'Two Tribes' and 'The Power of Love', but do you know they come from a sprawling double album that features covers of Edwin Starr, Bruce Springsteen and Dionne Warwick? Or that the first track is an aural wonderworld that stretches to thirteen minutes? Or that Chris Barrie (Red Dwarf, The Brittas Empire) provides not one, but two impersonations for spoken word passages?

Like The Lexicon of Love, a favourite album of mine, this is identifiably a Trevor Horn production. As with everything he turned his hand to during this era, ...Pleasuredome sounds incredible on a good set of speakers; and it helps that the performances were given a polish thanks to the presence of various studio hacks. Songwriting credits are spread amongst the band on the original cuts, but singer Holly Johnson is probably the only member of Frankie... who can be counted as a consistent presence.

The only time Horn's golden touch turns to shit is the completely gratuitous, chintzy cover of Warwick's 'San Jose (The Way)' One might argue that most of the covers, skits and interludes are gratuitous, given that they amount to little more than padding, but 'San Jose' simply doesn't fit in with the bombastic, priapic thrust of almost everything else on ...Pleasuredome. It's pretty insipid, especially when compared to their hemi-powered turbo through Springsteen's hoary old classic 'Born To Run' (incidentally, I knew the Frankie... version before the Springsteen original, and I prefer it). Admittedly, the cover of 'War' sounds a little anodyne, sacrificing the raw funk power of the original instrumentation for synthesizers, but it's saved by a bizarre intro courtesy of the aforementioned Chris Barrie, rambling away in a startlingly good Ronald Reagan take-off.

The covers aside, about the only other aspect of ...Pleasuredome I don't like is 'The Power of Love'. Although it's Johnson's most assured vocal on the album (albeit shorn of his usual winking seediness), overall it's a sluggish, insincere mess. How it became the Christmas-defining giant it has morphed into is anyone's guess; I was going to say it belongs in the same division of insipid yuletide pap as East 17's 'Stay Another Day', but that's harsh on Brian Harvey (a man who managed to run himself over after consuming too many jacket potatoes) and company. Go ahead, call me a tin-eared poltroon, but it's a shit song.

However, elsewhere the music fizzes, bubbles, pumps and shimmers in gloriously overblown style. It's easy to forget just how pounding 'Relax' sounds with the dials turned up; on the other hand, it's difficult to understand just how BBC programmers let this one through the net to be played on daytime radio when even the bass line sounds this obscene. The other superstar number, 'Two Tribes', is thrillingly propulsive, coming on more like Iron Maiden's 'Wrathchild' than any piece of chart fluff has any right to. It's also slyly self-referential with the lyric 'Are we living in a land / Where sex and horror are the new gods?', when ...Pleasuredome contains 'Relax' (which was accompanied by a suitably deviant music video) and 'Krisco Kisses', a snazzy paean to fisting.

On that point - the what was originally side four contains some lesser known gems (and 'The Power of Love'), all written by Frankie... personnel. Neither 'Black Night White Light' nor 'The Only Star In Heaven' are classics, but both have their merits; the former rendered especially attractive by its moody minimalism and stuttering rhythms. There's a couple of decent Frankie... generated moments on side three too, chief amongst them the jive-talkin' funker 'Wish (The Lads Were Here)', which features some truly tintinnabulous slap-bass playing.

The very definition of a mixed bag, then, but with Horn at the helm ...Pleasuredome almost always defies banality with sheer presence and heft. Even the quieter moments are swaddled in banks of keyboards and guitar, culminating in a comfortable mid-range miasma that bathes the eardrums. How else, honestly, could you get away with a track like 'Welcome To The Pleasuredome', with its gongs, harmonica, Fairlights, jungle ululations and twisted snatches of Samuel Taylor Coleridge? It rises and swoops like a Gershwin rhapsody for nearly quarter of an hour and never once grows wearying. In some ways it resembles Rush's '2112', inasmuch as it serves as a blueprint for everything to follow. Bonkers, over the top, sublime.

Oh, and Barrie's other impersonation? Prince Charles, ruminating upon the male orgasm. Have fun, kids!
Posted by AC at 12:49