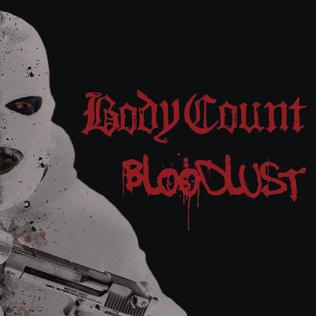 Provenance: I was only dimly aware of Body Count for many years, due to the notoriety of their 1992 song 'Cop Killer'. Nonetheless, quite by chance I stumbled across 'Black Hoodie' from Bloodlust on YouTube and was pleasantly surprised.

In any case, I prefer my rap-rock crossovers more of the Public Enemy and Anthrax flavour, as opposed to Run DMC vs Aerosmith. Can't particularly knock the latter, but it sounds tame compared to Chuck D and co. making an industrial sized ruckus.

Review: You don't so much as listen to this album as get beaten around the face with it. At times, the most accurate summation of the experience I can muster is that it's the aural equivalent of repeatedly taking a tyre iron to the bridge of one's nose. This is, of course, glorious. Heavy metal can be many things; slow, stately, symphonic, fast, virtuosic - but there's always space for a spot of the ol' ultraviolence, which is exactly what Ice T et. al. serve up for the discerning listener.

More albums should start with some kind of siren noise, incidentally. It's fucking cool. Doubly so if that song features Megadeth's Dave Mustaine, which 'Civil War' does; but it also contains a lyric that isn't too far flung from Frank Zappa's 'Trouble Every Day' in terms of message. Think of it as a twenty-first century update, but where Zappa seemed to meet the challenges of the day with a peevish lassitude, Ice T demands his audience take a side. Looking at what's unfolding in the body politic of the USA, how could it be any other way?

I was a bit worried that the entirety of Bloodlust would be a political diatribe - not because that is, in and of itself, a bad thing, but because Body Count aren't the most subtle operators. I was therefore delighted to hear that second track 'The Ski Mask Way' is brimming with all kinds of villainy and devilment. Basically, it's a paean to the practice of home invasion. Not something I imagine that we'll be hearing on BBC Radio 2 any time soon, I'll wager. Still, Ice T delivers it with a convincing aplomb. And why should popular music not be so matter-of-fact about objectively criminal pursuits? I recall seeing Ice T talking in a documentary about how he was influenced by the writing of Iceberg Slim, a pimp and all-round rascal who wrote books detailing his version of street life. I live in a society that tolerates any kind of awfulness if it's written plainly on a page, but recoils the moment it's depicted in song. Won't someone think of the babies?!

Aside from Dave Mustaine, a few other heavy pals are roped in to help. Max Cavalera (Sepultura) roars the refrain to 'All Love Is Lost', whilst Lamb Of God's Randy Blythe is on hand to lend some heft to 'Walk With Me', a true highlight. In truth, though, Ice T doesn't need too much window-dressing; his declamatory, hyper-aggressive delivery is the perfect match for Body Count's riffing. This is a band who make their instruments sound like power tools, and yet there's no shortage of finesse there. Indeed, 'Raining In Blood / Postmortem 2017' is probably the best Slayer cover I've heard, and it really works with (new) rapped verses. (NB - for those squinting at the tracklist, I am happy to report that 'Here I Go Again' isn't a reinterpretation of the Whitesnake arena-botherer of the same name.)

Still, I think Bloodlust reserves its strongest meat until the final furlong of the album. 'No Lives Matter' is a provocative title, and true to form, it's a slamming dose of focused, righteous rage. It's preceded by a short monologue by Ice T on the vacuity of the phrase 'all lives matter', which is succinct and spot on. I don't know how anyone can tune into the news or scroll through a social media feed without coming away with the notion that institutional racism is not a bug but a feature of American law enforcement. In a similar vein, 'Black Hoodie' - the number that piqued my interest in Bloodlust - is a two-fisted take-down of racial profiling by, you guessed it, law enforcement (NB - I mention American policing specifically in this review, because that's what Body Count are talking about, but things are far from perfect here in jolly old England). 'Black Hoodie' is the best track on Bloodlust - a chattering verse riff married to a doomy chorus, and Ice T spitting like he wants to strangle a motherfucker.

I would not listen to this album whilst in charge of a motor vehicle. I could not listen to this album when reading a book. When would I indulge in a spot of Bloodlust? Working out at the gym, preparing to enter a cage fight, and doing my taxes. The Body Count of Bloodlust does not strike against its enemies with surgical precision - it sledgehammers them into submission, and doesn't let up. Strange, then, that an album shot through with such a bleak strain of reality is simultaneously as affirming - and fun - as Bloodlust is, but that's testament to the skills of Ice T and Body Count. Powerful stuff.
Posted by AC at 09:13