Too Many Snakes in the Road - Kent DuChaine 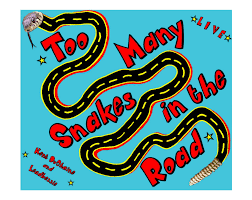 Provenance: Kent DuChaine is a real one. He's played tens of thousands of gigs and, by his own estimation, has travelled somewhere between two and a half and three million miles as a consequence (after all, what's a spare half a million when you're grinding away on the road?). I've seen him play five times now, and the deal has been the same every time - it's Kent, his 1934 National Steel guitar 'Leadbessie' and a peck of the blues. Never once has he disappointed.

The first time I saw him was at the Lansdown Arms in Lewes. A couple of friends of mine recommended it as a good night out, knowing I was a blues fan. They also mentioned his absolutely bonkers tour schedules, which are a work of art in themselves worth checking out. I had grown to expect blues gigs to be a bit mannered, perhaps a little tame - but a Kent DuChaine gig is nothing of the sort. In a packed sweatbox of a venue he hammered away with a hard-driving attack that instantly got people up on their feet. It was one of the most boisterous and joyous shows I had witnessed in a long while.

I suppose it shouldn't come as a surprise that DuChaine is able to move a crowd - he's been doing it for years, and has honed his craft to an expertly-paced set liberally sprinkled with anecdotes and tall tales. I'm sure he'll be back soon, criss-crossing the country and playing to rooms large and small; go see him if you get the chance.

Review: As I mentioned before, Kent DuChaine has been a consistently excellent live act so I've bought a couple of his CDs at gigs I've been to. After all, a guy who gets by primarily by touring can't survive on applause alone. The double album Too Many Snakes in the Road is interesting because not only are the tracks recorded live, many of them are preceded by the stories that DuChaine tells to introduce them to his audience. A pretty cool twist, but does it work?

In a word, yes. To develop it further, I think it's worth digressing a little to talk about how blues music is treated - namely with the kind of reverence usually reserved for museum exhibits or particularly long-lived politicians. Lots of ink has been spilled about blues music as a genre born out of African-American suffering, which is absolutely not incorrect, but with that has come an attendant solemnity that simply does not fit. By focusing on the bleaker end of the spectrum there's been a tendency to ignore or downplay the bawdier, funnier, lighter side to the music, which if anything was predominant. By trapping it within the amber of authenticity and gravitas, I fear many historians and critics also deny its power as a live phenomenon. This wasn't music you were supposed to scratch your chin too!

Whether consciously or not, Kent DuChaine grasps both of these issues. He doesn't omit to retell the odd myth about luminaries such as Robert Johnson, but then there's also stories of going fishing with Johnny Shines, playing Bukka White's guitar and sharing reefer and champagne with Muddy Waters. Furthermore, when he's playing 'Little Red Rooster' he's not expecting his audience to sit in rapt silence - he's asking them to howl along with him. Hell, the first time I saw him he had people on tables throwing beer around and belting out 'When the Saints Go Marching In'. In DuChaine's hands, the blues is a vital, muscular music.

As he demonstrates on Too Many Snakes... he's also a mean, mean player. Eschewing flashiness, instead he plays with a heavily percussive approach, hammering away on the strings with his right hand whilst slashing away on slide with his left. Nowhere is this better exemplified than on his version of 'Aberdeen Mississippi Blues', which features a bludgeoning intro that sounds like nothing other than the clattering of a freight train, that old favourite avatar of the blues. Elsewhere, DuChaine's full-blooded approach breathes new life into old bones; the popular standards 'Fever' and 'Summertime' are not so much reinvigorated as given a total blood transfusion and a side order of monkey glands to boot.

Given the richness of the blues tradition, and DuChaine's obvious affection for its greatest exponents, it's unsurprising that most of the songs on Too Many Snakes... are covers. However, a true highlight for me is an original composition that is preceded by a wonderful story; '16 Gauge Steel' is a tribute to Johnny Shines, who underwent something of a renaissance after DuChaine himself got him back recording and touring, acting as his sideman until his death. Every time I hear the verse "I have stood in the Georgia pines / With the legendary Johnny Shines" I'm not embarrassed to say that I catch my breath a bit. So simple, yet so evocative.

By his own admission DuChaine is not the best singer out there, but as he advised your author, "you just gotta go for it" and that's what you hear. It honestly doesn't matter though, not at all, when his right arm is pumping up and down like a steam piston and he's chugging his way through 'Rock Island Line'. Kent DuChaine is a superb emissary for the blues as a music that is both varied and vital, and Too Many Snakes... is a very fine testimony to the fact. Now go see the man perform!
Posted by AC at 14:31