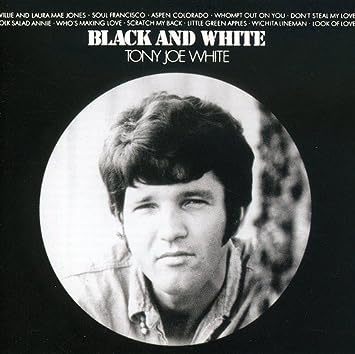 Provenance: The origins of where and how I first encountered Tony Joe White are now obscured by the mists of time.

I can definitely state that I was aware of the man and his music before September 2010, which I spent in the USA. Here's why:

a) I vividly recall hearing a god-awful song chronicling the downfall of some poor southron maiden or other set to the music of 'Willie and Laura Mae Jones' on the radio. I was near Nashville at the time.

b) I managed to finagle my way into a private function at Graceland, and the Elvis tribute band (no pressure there, lads) played 'Polk Salad Annie'.

c) I met a guy in Louisiana who claimed to have known Tony Joe White a little in his youth.

Don't get me wrong, my road trip around the Deep South wasn't some kind of extended Tony Joe White-themed promenade, he just happened to crop up a fair amount. I wish I hadn't encountered that re-write of 'Willie and Laura Mae Jones' though, because it was like an ice-pick to the ears. I've tried to locate it for this review but no dice, so if anybody knows what I'm talking about, please get in touch.

Review: Mere words are inadequate to describe how much I fucking love this album. Yet I also find that words are hard to come by in articulating why Tony Joe White's debut had such a profound impact on me; a clear-eyed (or clear-eared?) reviewer would no doubt highlight the flaws and half-developed ideas littered throughout the album. I, however, don't fall into the clear-eyed category; in fact, I was not a little lachrymose when I finally saw 'the Swamp Fox' himself in London last year with my friend Rachael.

(Can I just add something about the TJW live experience? White played a guitar plugged directly into an onstage amp, with precisely two pedals at his disposal - a wah-wah and a deafeningly loud overdrive, which transformed his music into proto-metal garage rock every time it was activated. His only accompaniment was a drummer, which meant the sound could sometimes feel a bit empty when TJW played lead breaks. Yet he could be absolutely mesmerising, even when he talked to the audience in his indecipherable molasses-thick drawl).

Listening to it again now, I still feel both comforted and excited by the sounds coming from my speakers. Firstly, that voice. That drawling, cool, subterranean baritone is absolutely perfect. It's not particularly well-recorded, and sometimes distorts when he fails to moderate his volume. Yet this is precisely why I love it - unlike so many modern recordings where a vocal is tracked numerous times, levelled out and compressed, this is an unadorned and honest record of one man's utterly peculiar instrument. It also helps that White possess a collection of weird vocal tics, smattering his performances with lusty grunts and non-lexical vocables.

All this is performed over what can be described as country-funk, at least on the originals that make up just over half the album. When it hits its stride, Black and White really cooks. Aforementioned opener 'Willie and Laura Mae Jones' is a fine example. Covered by Clarence Carter, Brook Benton and Dusty Springfield amongst others, it's a soulful and powerful little fable about race relations between poor blacks and whites. 'Aspen Colorado' is a quietly poignant story vignette about a young man trying to make his own way in the world, and the famous 'Polk Salad Annie' (a staple in Elvis Presley life performances) is belting rocker about an indigent girl and her 'no account' family. In all these instances, White proves to be a deft caricaturist, able to breathe life into his subjects with his wry, nuanced eye for detail.

There's a fair amount of sex on offer too. 'Whompt Out On You' portrays White as a callous lothario, and contains a drum break every bit as funky as 'Amen, My Brother' by the Winstons. 'Who's Making Love' is a soul-power cautionary tale to every dude stepping out with a side-slurp, and he even imbues the Bacharach standard 'Look of Love' with a breathy, languid eroticism. In fact, for such a good and prolific songwriter, White is a very able interpreter, showcasing his ability to inhabit a song on both 'Little Green Apples' and 'Wichita Lineman', the latter possibly just outflanking the Glen Campbell version (heresy!) in my estimation (burn him!).

Deep, seductive, slow and loose, Black and White is a quirky yet colourful slice of downhome escapism. White's idiosyncratic singing only serves to make this a more affecting collection, and Rachael can no doubt attest to my fondness for White's turn of phrase (we still text each other references to 'corn pone', mentioned in 'Willie and Laura Mae Jones' every now and again). Essential listening, y'all.
Posted by AC at 13:58