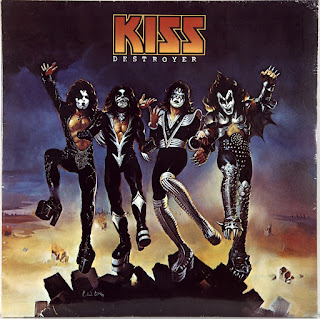 Provenance: Lost to the mists of time. There's no great story behind this one. I suspect I bought it after enjoying Kiss' Double Platinum compilation.

Review: Five-and-a-half years ago I reviewed Destroyed by Sloppy Seconds, which features cover art that sends-up that of Destroyer. Sloppy Seconds were (are?) a scrappy Indianapolis punk band with a cult following. Kiss are globe-bestriding monsters of arena rock. Yet the Sloppy Seconds offering knocks this into a cocked hat. In this instance, the apprentice quite easily bests the master.

On the basis of this (and the other Kiss album I've reviewed so far) I can only conclude that the band's enduring popularity is built squarely on their Alive! series of live recordings. Why? Because in the studio, they were absolute tripe.

There are precisely two listenable songs on Destroyer - opener 'Detroit Rock City' and 'Shout It Out Loud'. The former is a song I could listen to practically any time of day or night, although I could do without the prelude. This consists of a whole minute of your life listening to a fake radio station and the most underpowered car in the world starting up. It sounds like the pump in my fish tank. However, once into the meat of the track it's a different story - a headrush of cool bass riffs, hysterical vocals and drink driving. It even squeezes in Space Ace (maybe?) playing a distinctive, flamenco-tinged solo. It would be reasonable to surmise after this barnstorming opener that the rest of Destroyer is gonna rock.

Well, sorry to dash your cherished hopes 'n' dreams, because it's a precipitous slide downhill thereafter. It's not that the songs are, in and of themselves, terrible, once you remove lyrics, singing and execution from the mix.

To give 'King of the Night Time World' its due, it's about the last time 'Starchild' Paul Stanley sounds relatively human. It would even be a decent song if played by a decent band. But this is Kiss, starring Peter Criss on drums, a guy who makes Moe Tucker sound like Terry Bozzio. Bob Ezrin does his best to bury some of the more rancid stuff, but his 'jazz influenced' hi-hat work is splashed across 'King...' like puttanesca sauce down a crisp white t-shirt. Next up is 'God of Thunder', with Gene Simmons sounding like he's trying to burp up a hot-dog over the a plodding backbeat.

However - at least these are, at a foundational level, heavy rock songs, no matter how ham-handed they've been rendered. What the fuck is 'Great Expectations'? It's sopping wet, with a syrupy string arrangement and underscored by a horrid, shrill choir. I don't know what it's trying to achieve other than being the most suck-ass thing ever committed to vinyl; and even then it's a failure, because it's not even the biggest pile of horseshit on Destroyer. 'Flaming Youth' is okay, I guess, if you like Sweet b-sides sung by Paul Lynde. 'Sweet Pain' meanwhile just sounds inept; how Bob Ezrin heard this and thought "yeah, that sounds like four guys all playing in the same room at the same time" is a mystery.

At least there is some respite in the form of the aforementioned 'Shout It Out Loud', which is gloriously dumb, as opposed to plain dumb - a big, hooky invitation to get down and party, Kiss-style! What makes this track pop so much - the maracas? No matter, 'Shout It Out Loud' has got the wow factor - a cool descending piano riff, a chorus so sticky that even the Men In Black would struggle to wipe it from memory and handclaps that seem to be in the right place. It's an island of fun and kineticism in an ocean of sclerosis. Perhaps Destroyer finishes on a flourish..

Hol' up, there, pard'ner! This here's 'Beth' country! Yes, 'Beth', winner of a People's Choice Award in 1977, is a proper stinker. It makes 'Great Expectations' sound like Napalm Death, a track that Captain and Tennille would've rejected for being too drippy. Peter Criss gets to sing, which could be fine, as he did the lead vocals on actual good song 'Black Diamond'. Alas, here he seems to think he's the next Rod Stewart, croaking away over a sea of piano 'n' strings schmaltz. It's the nadir not only of Destroyer but 1970s rock - which whips ass in general - altogether. Here's a fun call back: 'Beth' made its US television debut on the Paul Lynde Halloween Special, where Kiss performed alongside such luminaries as Florence Henderson, Billy Barty and the Osmonds. (In the interests of fairness and balance, here's Kiss doing a great mime job with 'Detroit Rock City' on the same show.)

'Beth' isn't the final word on Destroyer - that honour goes to 'Do You Love Me?', which is alright-ish but like trying to wash your mouth out with a thimble of Listerine after gargling sewage for three whole minutes. It would play better for me today if I didn't believe Paul Stanley sincerely meant every single narcissistic word.

Apparently many Kiss fans think Destroyer is the band's best studio album. God almighty! You know, I might actually prefer Hot In The Shade (though I'm in no massive hurry to confirm this). Clearly - and it's obvious from live footage - Kiss are a band best witnessed in person, all their theatrics and whizz-bangs undoubtedly part of the appeal. Hell, I've seen 'em live and it was top entertainment. The bones of good rock songs are there on Destroyer, and they become fully-fleshed in the live arena. Nonetheless when sat at home, listening to their studio efforts, Kiss come across as a pallid, even timid, version of themselves.