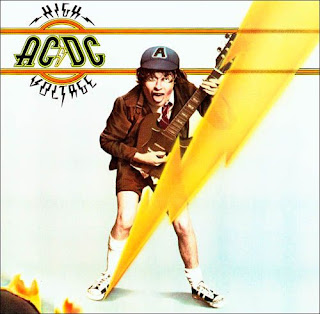 Provenance: Somewhat murky; this is my first AC/DC album, and I suspect I bought it myself in Bournemouth's Essential Music.

However, a tiny voice buzzing in the back of my mind tells me that my dad possibly bought this for me on a whim? Which is odd, as his tastes veer more towards Frank Zappa and the mighty Gryphon. Meat 'n' potatoes Antipodean rock was part of the household ambience until my brother and I indicated that we wanted to make a ruckus on drums and guitar respectively.

Incidentally, we liked AC/DC because it sounded simple to play, but then we could never get the rhythm of 'T.N.T.' correct and gave up. Does this suggest hitherto underrated rhythmic complexity on the part of messrs Young, Young, Scott et al? Or utter ineptitude from our side when it came to playing even the most basic of rock 'n' roll songs? You be the judge!

Review: Despite Twitter's brain-rotting qualities, around about the time of the 2016 US presidential election, some online wag once commented that "Donald Trump is probably the first president who likes AC/DC", meant to be a fairly unflattering comment on both. Intriguingly, whilst it appears that AC/DC may have actually written a song about Donny Deals, we don't know if the Trumpster has ever cranked 'Thunderstruck' or 'Whole Lotta Rosie' in the Oval Office, Trump Tower or Mar-A-Lago. We do know that the 45th president of the USA was one of the first people to purchase Guns N Roses' Use Your Illusion albums and that he rates the music video to 'November Rain'. Horses for courses - me, I think, like the song, it's excessive, tacky and overblown.

It's worth noting that High Voltage was not exactly a collection of original material; rather, it was a cut 'n' shut job of the band's previous two Australia-only releases. Let's just say you can't hear the join - there's no big evolution, Incredible String Band-style, between their first album (confusingly also titled High Voltage) and the next (which is called T.N.T. but is the first time we hear a song called 'High Voltage - keeping up?). Taking a gander at the two Australian releases, the material from T.N.T. that wound up on this album is stronger, though that does include 'The Jack', a song I consider utterly devoid of merit.

Were AC/DC really so primitive? Well, yes. This is pretty much an album of foot-stomping, blooz-based rockers without a particular surfeit of chord voicings to contend with. However, there's plenty going for it; for a start, the Young brothers somehow alighted on one of the meanest, crunchiest guitar tones this side of the International Date Line, which means even when they're vamping away on something simple like 'Rock 'N' Roll Singer' or 'She's Got Balls', the music has a kicky, muscular feel to it that is quite irresistible.

There's also a kind of genius at play in the sheer economy of the sound - it's raw and uncluttered, and to my ears all the tones from guitars and bass come solely from amplifier settings being tweaked. This really stands out in 2021, given the amount of preamp and production-stage effects most guitar parts are wrung through in modern music. Every instrument and voice thus has room to breathe, the biggest beneficiary being Phil Rudd's drumming, which is basic to the point of being Stone Age, but is executed with a truly organic sense of feel and groove.

I will admit that the combination of Bon Scott and AC/DC's lyrics are an acquired taste. Personally, I like his winking, leering good-time delivery, but at times the words make me want to hide. Aside from, 'The Jack', the most tedious and wretched joint here, 'Little Lover' and 'Can I Sit Next To You Girl' set my teeth on edge. However, Scott comes into his own when yelping about how hard AC/DC rock (always a fertile subject), especially 'It's A Long Way to the Top', 'Live Wire' (my favourite Scott performance on High Voltage) and 'High Voltage'. He's also good at playing the dangerous gunslinger on 'T.N.T.', the best track here - from its chewy guitar hook and the chanted 'oi!' intro to the braggadocio of the lyrics ("So lock up your daughter, lock up your wife / Lock up your back door, run for your life / The man is back in town / So you don't you mess me 'round") it simply whips ass.

Oh, and whilst the colour palette may be a little spare, AC/DC do achieve one notable feat, which is making the bagpipes sound bearable in popular music. Something even the maestro, Paul McCartney, failed to do. Undoubtedly a nod to the Scottish roots of half the band (Forfar-bon Scott is, apparently, the bag-botherer in question), its inclusion in 'It's A Long Way...' is extraordinary, propulsive, droning and huge. I have seen another band, Finnish folk metallers Korpiklaani, do an okay job with bagpipes, but this is the only example I actively like (NB: it seems that Korpiklaani have ditched the instrument; it seems that only one of the thirty-four people to have been in the band could blow pipe; they've kept the accordion, though - hmmm).

AC/DC would, of course, go on to dominate the world of hard rock, most notably with the record-breaking Back In Black, and would arguably compose better music. However, as a manifesto for a tough, scrappy bunch of barroom rattlers, High Voltage hits all the marks. Yes, they got bigger - but did they ever sound more vital?