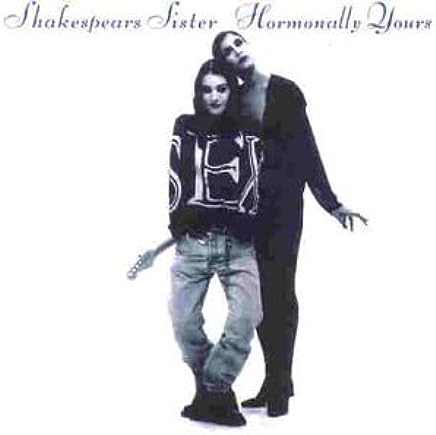 Provenance: This is another one I picked up off a school friend for about a quid.

I recall 'Stay' being a behemoth in the charts, but of equal importance to me was the bizarre playground rumour that Siobhan Fahey once checked into rehab for an addiction to fried chicken.

Besides, that's a cool cover! It's like Vivienne Westwood decided to style Lilian Gish or Theda Bara.

Review: You know, Shakespears Sister (sic) are playing down the road from me next month. I might go along.

Anyway, Hormonally Yours - called thusly because both Marcella Detroit (the tall one who wasn't in Bananarama) and Siobhan Fahey (ex-Bananarama) were pregnant during the making of the album. I shouldn't really be so flip about Detroit, who prior to Shakespears Sister performed as a backing vocalist for a couple of rock A-listers (Bob Seger, Eric Clapton) and wrote songs for many well-known artists, most notably 'Lay Down Sally', one of Slowhand's more bearable songs.

It's been ages since I've given Hormonally Yours a spin, and therefore doing so now feels like diving into an album for the first time. Two things strike me from the outset; one is that it's less spooky than I had assumed it would be (based on the archly gothic 'Stay' I suppose), and the other is that Marcella Detroit has a remarkable voice. At times she sings in the same range that Kate Bush used throughout much of The Kick Inside, but if anything there's more power and control behind these performances. It also contrasts splendidly with Fahey's delivery, which may not contain Detroit's technical fireworks but proves a warmer, more languid, more sensuous counterpoint.

Given their image and the 'Stay' fictional universe I imagined Fahey and Detroit inhabited, it's quite a surprise to hear that most of the first side of the album is pure power-pop - very, very good power pop. It takes its cues from Jellyfish and Redd Kross in some respects, and points towards the successful formula adopted by the post-millenial Cheap Trick in others. 'Goodbye Cruel World', 'My 16th Apology' and 'Are We In Love Yet' are simply fantastic, bouncing around the place with big chewy hooks and quirky little musical interpolations. I wanted to dislike 'Emotional Thing', as it starts off like a pale Was (Not Was) imitation, but I was won over eventually, not least of all by the incongruous blues harmonica that crops up halfway through.

Seeing as 'Stay' was such a blockbuster, I was half-expecting it to overshadow much of the other material. It's certainly meant as a compliment when I say that it doesn't stand out from the pack, other than as a change of pace. If it wasn't for its ubiquity, and my subsequent familiarity with it, 'Stay' would've just been another track I had reason to be excited about. It certainly is the most overtly goth-influenced thing on here, with a mid-section that sounds a wee bit Sisters of Mercy; the only other time I think 'ahhh, goth!' is in the chorus to 'Moonchild', which is disappointingly (for me) not a cover of Iron Maiden's best song. Even then, we're talking Gene Loves Jezebel goth, not Killing Miranda goth.

About the only misstep on Hormonally Yours is 'Black Sky', which has a slight Madchester vibe and a very dated house piano vibe. It's not terrible, and neither is 'Catwoman', which to these jaded old ears sounds like classic Shania Twain. It gets by, though, by being both utterly bonkers and by ending on a note that Detroit hits which caters to the hearing range of bats. On the other hand, props to Shakespears Sister for doing a song called 'Let Me Entertain You' that isn't a warm bath of shite.

Since giving Hormonally Yours a bash I'm left with a lingering shame that this album has lurked unloved at the bottom of my record collection for so long. It didn't deserve that fate, unlike some. Rather, Hormonally Yours is a catchy, weird, idiosyncratic jewel that cloaks its strangeness in an addictive pop-rock packaging. I think I'll be buying that ticket now.
Posted by AC at 09:41