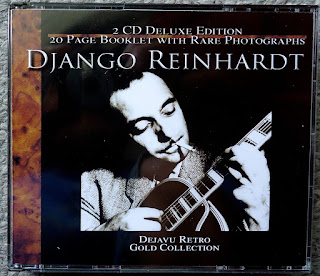 Provenance: Back when I was first learning how to play guitar I heard tell of a man who, despite a partially paralysed left hand, could play incredible stuff. This was a time when Napster was in its infancy, so I happily shelled out for this cheap two-disc compilation when I spotted it in HMV one day.

The guitarist, of course, was the Belgian-born Romany jazz legend Django Reinhardt. As such, this is probably the first jazz album I ever purchased.

Review: Bear in mind that at the time of buying this my musical diet was a steady intake of Led Zeppelin, Black Sabbath, Deep Purple and other 'eavy bands of the classic rock era. Through picking up the guitar I was starting to learn about blues through the gateway of Stevie Ray Vaughan, albeit one could probably make the case that SRV was only half a step away from classic 1970s blues rock and thus more palatable to my ears than the likes of Charley Patton or Blind Lemon Jefferson.

Despite being a cloth-eared pithecanthropoid, even back then I knew I was listening to something quite sensational. I was one of those guitarists that went through a phase of equating technical brilliance to musical competence, and I saw Reinhardt through the same lens as Joe Satriani and Steve Vai. Almost twenty years later I barely ever whack Satch on the stereo, and can't recall the last time I gave Vai an outing. Reinhardt endures, however. Why?

For one, he was an incredible musician - not just in a technical sense (but let's not forget he was essentially playing with half the regular number of fingers on his left hand for almost his entire recording career) but also as an improviser. You can hear him lean into a song, strike up the melody and then run with it into new and exciting territories. Blazing virtuosity can work when it's in service to something greater than a demonstration of itself.

Secondly - once where I was fixated on the guitar, now I give equal attention to the other master to feature on these recordings, the violinist Stephane Grappelli. The grace and fluidity of his execution is the perfect complement to Reinhardt's quicksilver trickiness; imagine the bluegrass duels you might have heard between banjo and fiddle players, transplant that to a jazz idiom and you're not far off what's going on here. Although the liner notes don't say as much, I'm quite sure that all the tracks here are from their fruitful time together in the Quintette du Hot Club de France string ensemble.

The third thing to mention is that as I've grown older my sensibilities have changed and evolved. My criteria have expanded from 'heavy riffage' and 'cool fingertapping solos', which I suppose can be a sign of maturation. Anyway, when I was a teenager I didn't have an instinctive feeling for jazz, or more specifically swing. Now I've digested a lot more, I can appreciate just how hard some of this stuff swung, even more remarkable as it was achieved without the aid of brass or percussion. The boys playing rhythm (including Django's brother, Joseph) certainly knew their task but Reinhardt also provides some amazing moment of push-pull, throwing in half-bends and double-stops to add variation and spice.

Two CDs in a row is a bit wearying, as the tracks all possess a similar feel, but played sparingly this Django Reinhardt collection still has the ability to wow over eighty years later. The Quintette's output is still the gold standard by which gypsy jazz and string band swing is held to, and rightly so.
Posted by AC at 10:58