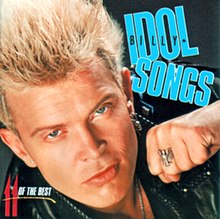 Provenance: When I was in my mid-teens a girlfriend of mine asked me what I wanted for my birthday. "Oh, I don't know, maybe a Billy Idol 'best of' album?". Instead, she dumped me.

Fast forward to 2010 and I'm stood in a rain-lashed field in Sweden. Billy Idol is finishing up onstage with a version of The Doors' 'LA Woman'. He has replaced Los Angeles with Malmo, despite being 130km away from the latter location. Hitherto he has treated us to, amongst others, the following:

a) An acoustic version of 'White Wedding'
b) The Allen Toussaint song 'Working In A Coal Mine'
c) A shitty autobiographical song that references 'Hot In The City'; this is further compounded by the fact that he doesn't go on to actually play 'Hot In The City'

It was one of the most depressingly awful experiences of my festival-going life. Nonetheless, I finally got my hands on this doozy - subtitled 11 of the Best - for two quid at a car boot sale in Eastbourne.

Review: On the 29 May 2016 Twitter user @TadKosciuszko had this to say: 'Mt. Rushmore of "punk" - Idol, Ghetto Blaster Guy from Star Trek IV, Adam Ant, & the guy that led the mutant biker gang in Weird Science'. Funny and true. Just as it maddens me that The Tubes are often classified as punk because they used the word in one of their song titles, it boggles my mind that anything Idol did as a solo artist can be remotely considered as representative of the genre. As it so happened, both Idol and Ant were at the vanguard of the original London punk scene but neither would make their name playing that music (though I should point out that Simon Reynolds does an excellent job at delineating how punk midwifed Ant's particular style in the superb Rip It Up And Start Again).

Despite retaining the more overt visual trappings of punk, it was Idol that moved further than Ant away from punk's initial art-school leanings. Who knows? Maybe the spiked peroxide quiff and leather jackets acted as an affirmation to Idol, an aide memoir to himself that, beneath the poppy hooks, the expensive videos and the even more expensive nose candy, he was still a scrappy rabble rouser who dropped out of a Sussex University English degree in 1976. Certainly, in that sodden field in Scandinavia, he made great play (not all of it coherent) about how we all need to return to the roots - and rootsiness - of rock 'n' roll. Curious sloganeering for a man who made his name with a very airbrushed flash-metal sound, and who would later pioneer mixed media releases (yes, really) with his 1993 Cyberpunk album which came packaged with a 3.5" floppy disk.

But let us not judge Idol the man, let us speak of Idol the musician. Here are eleven, count 'em, of the best. By his, or the record label's estimation, one presumes. Now, as much as I've been down on Idol thus far in this article, let me say this - by my reckoning, there are three tracks on here that are brilliant, and possibly qualify as masterpieces within the realm of pop. This troika of triumph is 'Rebel Yell', 'White Wedding' and, greatest of all, 'Flesh For Fantasy'. The first two are tough enough to rock hard and feature tasty guitar work by the underrated Steve Stevens but have the kind of precision-tooled studio polish that sounds great on a transistor radio and a melodic sensibility so strong that they grapple your cerebral cortex into submission.

Time for another reference to an ex-girlfriend of mine! This time it's to go on record with an apology to Bianca. Back in the day I'd listen to Spree FM in her kitchen in Berlin, which would play 'Flesh For Fantasy' virtually every day (or so it seemed). Bianca made it known she liked the song; I greeted this opinion with the mockery I believed it deserved, but today I am a changed man and I have this to say: Bianca, if you're reading this, I am sorry - 'Flesh For Fantasy' is incredible, even if lyrically it's mostly gobbledegook. On this issue - and this issue alone - you were right, and I was wrong.

What of the other eight songs that comprise his 'best'? Well, as you can probably guess from my annoyance that Idol forswore 'Hot In The City' back in 2010, I really like that one. Same goes for the mellow, dreamy 'Eyes Without a Face'. These are tier two Billy Idol songs. Then you have the curios like 'To Be A Lover', which contains all the trappings of church-inflected soul - bluesy piano, call-and-response female backing singers, tambourines - but winds up sounding like an ersatz mechanised gospel fever-dream. There's also 'Dancing With Myself' - which was recorded with his previous band, Generation X, and is by far the most 'punk' thing on this collection - and 'Sweet Sixteen', a weird, glabrous, spacey drowning pool of synths and angst.

Pretty much everything else on here is pony. At the very least, it's entertaining crap, and I don't skip the clunkers like 'Catch My Fall' or 'Don't Need a Gun' when I give Idol Songs as at the very least they stand as testament to Idol's 'swing-and-a-miss' approach, one that was evident even during his commercial peak. For all his faults, missteps and periods of inactivity I'm a sucker for the leathery old charmer. I'd even take another chance with the live experience on the basis that I'd be treated to (at least) eleven of the best.*

*(I was trying to find a place to include a "mo', mo', mo'" gag but decided it would only cheapen this august and serious blog.)
Posted by AC at 14:16