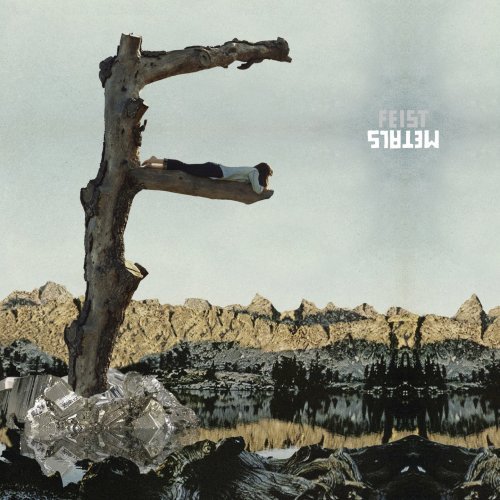 Provenance: Isn't it nice when you get turned onto something completely out of the blue? In this instance, this album came as part of a wedding gift from Noam Weinstein and his father Larry, two of the nicest people I think I've ever had the pleasure of meeting. Noam is a pretty fantastic musician himself, and I'm sure it won't be long before I review one of his albums on this blog.

Receiving albums as a wedding present isn't unprecedented in my family; when my parents got married one of their friends gave them a copy of Deep Purple's Stormbringer, Mk. III's inferior sequel to Burn.

Review: Feist is one of those artists I would never have discovered under my own steam. Too contemporary, too hip. I might hear the name in a conversation and I'll nod along affably before consoling myself that, really, I knew best and that it wouldn't be a patch on Jethro Tull. In short, I'm a total idiot under the sway of unshifting prejudices entirely of my own design. However, folk who don't know any better, such as the Weinstein family, chip away at my wall of ignorance and sometimes make small breakthroughs; I am now a confirmed Feist fan.

As for the music itself, I should probably start by saying that 'Graveyard' is one of my favourite songs - ever. Fragile, menacing, elegant and surreal, with an outro that boasts a brass arrangement that sounds as if it came off an early Alan Parsons Project long player. The quality doesn't dip on the next track either, 'Caught In A Long Wind', shimmering and poised, filigreed with oriental violin.

However, it would be wrong to characterise Metals as soporific (a term I don't use negatively, necessarily; I would happily describe John Martyn's Solid Air as soporific, inasmuch as half of the album conveys a sense of waking sleepiness). There are unabashedly quiet and delicate moments here, such as 'Bittersweet Melodies', 'Cicadas and Gulls' and 'Anti-Pioneer', but many of Feist's compositions are bursting with tension, threatening to unravel at the merest tug of the thread. At its most nervy, Metals inhabits that same weird nation of barely constrained emotion occupied by something like Stravinsky's Les noces. That's probably the most pretentious sentence I'm going to write this week.

Something else that stands out is the sound of the recordings themselves. In a world where clipping is a very real and stupid problem with recorded music, Feist and her producers have performed something of a minor miracle. The clarity given to each of the instruments used - and by the sounds of it, we're talking a whole heap of the damn things - gives an almost organic quality to the compositions. I'm especially taken with the percussion - in the best possible sense, the drums sound almost homemade, the bottom end rounded out with some really meaty rattles and clanks. My love for the Alan Parsons Project means that I would almost automatically be attracted by the brass arrangements, but it goes further than my prog predilections; one genuinely gets the impression of a colliery band, so full, so rich is the sound.

What else? One can't forget 'Comfort Me', by turns haunting and powerful, underscored by some swampy bayou guitar. It's such a good piece of music Feist could honestly sing me the words to the instruction manual of my vacuum cleaner and I'd be happy. Feist has a wonderful voice, incidentally - whispery and intimate without ever being truly warm. It sounds like the voice of someone alone, either living in their own head or cut adrift from the solid, mundane world. If, like me, you seek music to gift you that escapism from the quotidian and workaday, you may very well find it in Feist's strange, fractured universe.