Mothers of Invention - Cruising with Ruben and the Jets 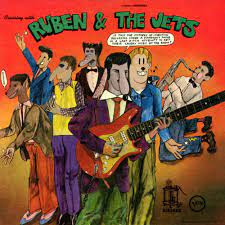 Provenance: I have mentioned before that my dad's Zappa fandom continues to echo through my musical tastes. What I probably haven't mentioned so much is where we diverge. Although my dad's favourite albums are probably mine, too (we're talking Overnite Sensation, Hot Rats, Apostrophe here), I certainly have more patience for the jazz-oriented stuff. Oh, and I really like 1950s doo-wop and rock 'n' roll, which makes me the perfect mark for Cruising with Ruben and the Jets.

Review: For those not up to speed, this is the Mothers of Invention playing dress-up - in 1968 - as a 1950s combo. It's the music they grew up listening too, but the passage of a decade must have seemed remote enough, in musical terms, that there was mileage in the notion. And the Mothers weren't alone - a year later Sha Na Na would debut with a schtick entirely around recreating the doo-wop phenomenon. In the 1970s, perhaps as a bastard offshoot of glam rock, the UK caught the bug with bands like Darts and Showaddywaddy. And what is the Rubettes' 'Sugar Baby Love' if not a hyperreal recreation of the doo-wop sound? Were Mud, with their matching wide lapels and spoken-word middle eights, a thousand miles away?

(Incidentally, Sha Na Na prove an interesting etymological bridge between the Silhouettes (whose 'Get A Job' is one of the great pop songs of all time) and the first president of an independent East Timor.)

Still, arguably, Frank Zappa and his mates were the first to breathe life back into the 1950s, but Cruising... is a peculiar record. One leaves with the impression that Zappa loved the music, but can't quite come down off his perch to play it straight. That would be too earnest, too po-faced by half. Which is a great shame, because it feels like every time the Mothers get close to producing something heartfelt and beautiful, there's a discordance or sneering that sours the deal.

As a consequence, the full effect of swooning slow burners like 'Love of My Life', 'Fountain of Love' and the wonderful 'Anyway the Wind Blows' are undermined with a mocking condescension, usually with some silly falsetto or bass vocal. Sadly, these aren't the only crimes to report.

To prepare Cruising... for release on CD in 1984, Zappa (in full control of the Mothers catalogue) decided to re-record the rhythm parts with Arthur Barrow and Chad Wackerman providing new bass and drum tracks respectively. Well, it sounds shit - farty, rubbery bass tones and crispy, plastic and utterly unsympathetic percussion. For an album that sets its stall out to recreate a particular era, to have these anachronistic sounds pulsing through the mix takes you as listener right out of the moment. Bring back Jimmy Carl Black (but not Roy Estrada).

(Incidentally, pre-everything being available on the internet, I saw the Grande Mothers whilst a university student. I would hazard that the Grande Mothers are probably the Zappa tribute act with the highest convicted sex-offenders-to-band-members ratio going. Probably. I even got a photo with Estrada. Sheesh.)

A pity, a pity. There are moments where everything works - 'Cheap Thrills' is fun, bouncy and irreverent in a way that bespeaks fondness, and 'Jelly Roll Gum Drop' is a fizzy showstopper that celebrates the inane potential of doo-wop lyrics in exactly the right way. And hey, it's nice that Zappa cuts loose with an outro guitar solo on closer 'Stuff Up the Cracks', just to remind you that you're not listening to an authentic forgotten relic from the Golden Age (a gag that would've flown better without the terrible 1980s overdubs).

Hey, it's still a decent listen and a bit of a curio, if somewhat ephemeral. Ray Collins' voice is great. Shame that, in places, it's utterly hamstrung by its creator. On purpose! You get the impression that Zappa hated pop music, deep down - and so, that being the case, why should the listener care either?